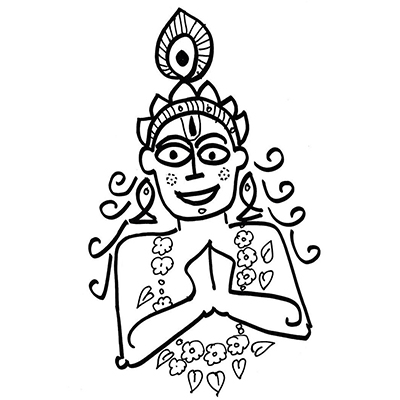 Vajranabhi, son of Aniruddha, grandson of Pradyumna, and great-grandson of Krishna, was king of Mathura and leader of the Yadava clan. He had heard a lot about Krishna, lovingly called Shyam, and so wondered how his illustrious ancestor actually looked. Sadly, no one he knew in Vraja had actually seen him.

So Vajranabhi went to the city of Hastinapur, in Kurukshetra, on the banks of the Ganga, and wondered if anyone there had seen him. “I was too young when he came here,” said King Parikshit, son of Abhimanyu, grandson of Arjuna, the great Pandava.

“I remember him,” said Parikshit’s mother, Uttara, now the old dowager, bent on a stick. She explained how Krishna had protected Parikshit, while he was still in her womb, from being injured by weapons hurled by Drona’s son, Ashwatthama, who had killed every other child of the Pandavas. She then proceeded to describe Krishna.

Vajranabhi worshipped all these images. Over time these images were taken by devotees to different parts of India and now we know them by various names: Banke Bihari of Vrindavan who holds the flute and bends like a dancer; the four-armed Ranchor-rai of Dakor in Gujarat, who withdrew from the battlefield; Srinath-ji of Nathdvara in Udaipur who holds aloft the Govardhan mountain; Sakshi Gopal of Odisha who bears witness to his devotees; Vitthala of Pandharpur in Maharashtra, who waits, arms akimbo, for his devotees; Krishna of Udupi in Karnataka who holds the cowherd staff and turned around for his devotees; Balaji of Tirumalai in Andhra who waits atop the seven hills for Lakshmi; Ranganatha of Shrirangam in Tamil Nadu who reclines like Vishnu on the Ocean of Milk; and Guruvayur-appan in Kerala, the child who appeared with four arms. These icons anchor the Bhagavata culture of Hinduism.

Is this story true? For devotees it is true. Whenever they see a sacred image of Krishna in a temple, they feel they have seen a portion of Krishna’s transcendental beauty. And that fulfils them. Historians will not see this story as fact, as it is based on faith, not evidence. For them, it is simply a cultural imaginary.

Likewise, there are many places in the world associated with other sacred figures. There are places with Buddha’s footprint. In the Buddhist world, there are places with Buddha’s relics such as his tooth and his hair. In Myanmar, there is even a stupa that claims to be the resting place of left testicle; there is a separate shrine for the right. In Saudi Arabia, there are caves that mark the place where the Prophet Muhammad had his first revelation (ultra-conservative Islamic forces forbid people from granting this place special status). In Jerusalem, there are churches that mark when Christ was buried. None of these can be proven historically. But they are markers of faith that gives meaning to the lives of the faithful.