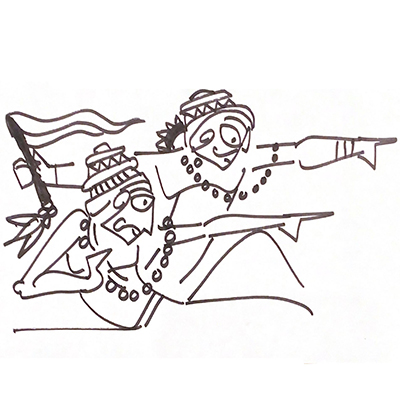 Rig Veda refers to two types of kingship: that of Indra and that of Varuna. Indra is the warrior-god who loves the energising Soma as he rides into battle to kill demons and retrieve cows. He is the god that the Aryans venerated when they were on the move. Varuna was a different god, more linked with settlements, with relationships and agreements, who drank Sura, or the relaxing alcohol. While Indra is linked to power, Varuna is linked to prosperity. Perhaps that is the reason why the oldest verses of Rig Veda refer to Varuna as Asura, who generates wealth, and Indra as Deva, who retrieves wealth. Indra is the raider. Varuna is the trader. Indra is the hunter. Varuna is the farmer. Indra is always on the move. Varuna is in the settlement. Indra wants you to come to the office. Varuna lets you work from home.

Covid forced us to discover the Varuna model of work, at home, with family by our side and home-cooked meals. Now, Indra wants us to return to work, sit together as a team, not in isolation. Which model is better? You can argue about the benefits of both models, and eventually come up with a hybrid, sometimes pleasing Indra, sometimes pleasing Varuna. Of course, those who venerate Indra, will lose employees to competition who favour Varuna. And those who favour Varuna will lose employees to competition who favour Indra. This is an eventuality.

Not all jobs have the benefit of this hybrid model. If the work involves materials, you have to be present at the shopfloor, the factory, the warehouse, the road, the doctor’s clinic. But up the value chain, in the world of data, emails, and servers, there is very little need to meet people. Everything can and is being handled remotely. You need that occasional meeting to motivate people, to have a drink with them, to sort out conflicts. The millennial generation anyway prefers to deal via the screen, rather than face-to-face. Even in meetings, we have people busy answering urgent text messages. The old warrior model of Indra is facing a real challenge from the Varuna model.

At one time, the internet enabled mobility. Consultants could work in flights, in hotel rooms, in client offices. Entire back offices could be shifted out of the USA to India. But now the internet enables remote working, from home, reducing the need to pay office space rent. No more long commutes in cities like Mumbai and Bengaluru suffering traffic and pollution. More time with children. More sharing household responsibilities. The Indra model separates the workplace from the home, and insists work is not life. It makes work about war and life about holidays. It also does not see household work as labour. Varuna does not see the divide between work and life; office work and household work mingle and merge, as they did in earlier times, before the Industrial revolution.

The idea of work has changed over time. In agricultural societies, work revolved around sowing and harvesting cycles with festivals in the long periods in between. In herding societies, work depended on seasons, and the reproduction cycle of animals. Craftsmen had workshops that were located in the house. Slaves lived with their masters. The merchants and bards travelled. The ancient Mesopotamians believed gods enjoyed life while humans existed to serve them. Protestant work ethic created the concept of ‘work is worship’ which served Communism and Capitalism really well. With the Industrial revolution, with ideas of productivity, work is timed. You have to work in shifts, for eight hours, with a few breaks, and you are continuously praised for your work, and you long for that weekend and that festive holiday. With the internet 8×5 has become 24×7. No one lived like this before.

But now as COVID era draws to a close (hopefully) we are in an ancient predicament like early hunter-gatherers who had to decide if they wished to settle as farmers. Do we want to continue working from home or do we go back to the traffic horror of the home-to-office-to-home routine? Do we want to be settled traders like Varuna or restless raiders like Indra, do we prefer the touch of the screen or be in touch with real humans? It all comes down to asking why work cannot be pleasure, and why it must be labour.