How To Transform an Object Of Art Into One Of Worship 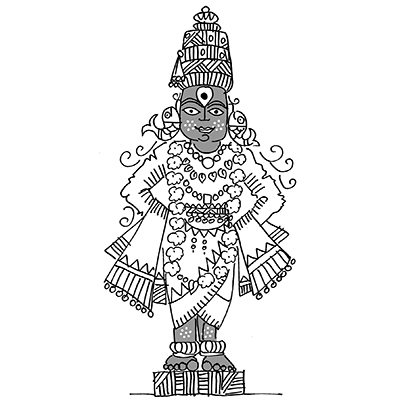 Objects of art are part of our day-to-day lives. Displayed in showcases, they lend beauty to the places we live in. Objects of worship are different: they are channels to access the divine. Both may have images of gods and goddesses, but they are treated differently. What makes the difference?

The same is done for pots, bells and utensils that are part of the ritual. If you observe the Hindu ritual you will notice that before the priest starts the ceremony, he will actually worship these items. He transforms a mundane object of art into a ritually sanctified object, charged with energy that will be used and worshiped.

Once the ritual is over, the deity is asked to leave the space, through a ritual known as ‘visarjan’ (departure), after which the object of worship once again becomes an object of art, and is treated almost like a corpse, from which life forces have drained away. Just as a dead body is burnt, the remnant rituals are cast away. This practice dates back to the Vedic period, when the entire sacrificial hall would be set aflame after the ritual ceremony. Even today after a puja, all the flowers and organic utensils that were part of the ceremony are submerged in water or are given away to charity.

In villages across India, we see rocks that lie unattended all year round that suddenly become sacred on a special day and are washed with scented water, and decorated with turmeric and flowers. This is the origin of the temple. Some of these rocks were enclosed in temples, as in Badrinath of Uttarakhand and Lingaraj of Odisha, and treated as ‘swayambhu’ (self-created gods).

Carved images of gods, in stone and metal, started being used around 1,500 years ago. Details about them are found in Agama literature, which are more popular in South India. Here there is a special image of stone, the ‘mul-vigraha- murti’ (primary statue of worship), placed in the innermost shrine of the temple, that is continuously sanctified, and its rituals reaffirmed each and every day. Then there is a mobile statue, ‘utsavamurti’ (festival image), usually of metal that is used in ceremonial parades. Both these statues can be secular art, before and after the ceremony. But when ceremonially sanctified, they become ‘swarupa’ (living image) of the deity in the temple, who has to be fed, adorned, entertained, and even put to sleep, like a living person.

It is important to understand Hindu art in the context of other religions too. A Hindu temple is where the god resides and you go to meet the god. He is alive and he sees you and you see him in the ritual of ‘darshan’. The deity is believed to sentient, capable of seeing and hearing those who come to visit him. The deity wakes up, he goes to sleep, he eats, he wears fine clothes, he enjoys art, he goes on boat rides, he loves to play on the swing. This humanisation of the deity is a critical part of the Hindu ceremony.

By contrast, a church or mosque is a congregating place where you gather to affirm your faith in the divine; it is a hall of prayer. It is not a place where you go to see God. In churches, one finds images of prophets and kings and god and angels — but these are only for embellishment and education. In mosques, visualising plants, animals and humans is strictly forbidden. In Islam, images and art are restricted to calligraphy and geometrical patterns. An exception to this rule was made in medieval Iran. But the puritanical Islam of Arabia frowns upon it.

In a museum, what you have is an object of art. You don’t render it alive through ritual. When you render it alive, it needs to be treated like a deity, which means it has to be bathed every day, it has to be fed every day, dressed every day, entertained every day. It is like creating a living creature and taking care of him or her. Museums cannot keep performing rituals to keep the deity energised. Therefore, when an object is ceremoniously placed in a museum, as is being encouraged by some ‘woke’ Hindus in UK and USA, one is missing the point.