How Many Types Of Sanyasis Are There? 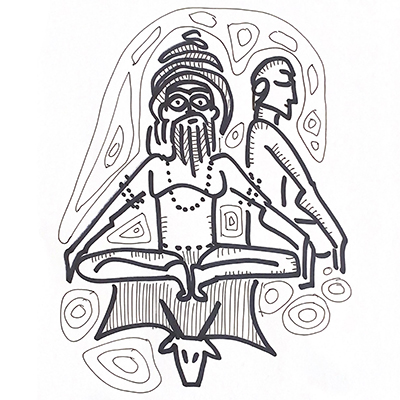 The idea of hermits, or the wandering ascetic, unwed, and nomadic, was an idea elaborated in post-Vedic literature, dated to 2,500 years ago, when we started hearing about shramanas

India is the land of sanyasis (or hermits) but the hermits are of different types. Harappan seals suggest that there were hermits in the Indus Valley over 4,000 years ago. We find references to rishis in the Vedas. Rishis were wise men who were able to ‘see’ mantras and communicate with the gods through various rituals. They were usually married. Agatsya is married to Lopamudra, Vasishtha is married to Arundhati, Atri is married to Anasuya. So, rishis are not actually hermits.

The idea of hermits, or the wandering ascetic, unwed, and nomadic, was an idea referred to vaguely in the Vedas. The idea was elaborated in post-Vedic literature, dated to 2,500 years ago, when we started hearing about shramanas.

Shramanas were people who rejected the yagya ritual, a ritual that bound you to the household. They chose to sit in serene meditation, contemplating the inner journeys of the mind. This included the Buddhist and Jain monks. These monks never stayed in one place and would keep traveling from place to place. They stayed in one place only during the four months of the rainy season. They were taken care of by common people who were known as shravakas. The shravakas would listen to the shramana’s lectures and discourses. These hermits were called sadhus, as they lived simple lives. They were called munis, because they often chose to stay silent.

In the Puranas, which are 1,500 years old, we hear stories of tapasvis. These were men who could control their senses and their minds and churn inner fire called tapas. These men were typically visualised in postures that we identify today with hatha yoga. They were able to obtain boons from the gods.

Asuras are also said to practice tapasya and that can make them powerful. Indra did not like tapasvis as he feared they threatened his position. Unlike him, they shunned pleasure. So, he sent beautiful damsels and musicians to tempt them, give up their restrained lives, and submit to a world of indulgences. Significantly, the word tapasvi means fire-churner and their arch-enemies, the divine damsels were called asparas or fire-maidens, indicating their rivalry.

Manusmriti refers to two types of sanyasis. The first type are those who, after education, decide to remain focused on the educational path. They do not become householders. The second type are those who become sanyasis after producing and raising children. Thus, in the Bhagavad Puran, there are references to Suka who refuses to look at women and forever remains innocent like a child. We also have a reference to Kardama Rishi, who produces a child called Kapila, and then becomes a sanyasi.

Around the 10th Century, a new type of ascetic emerged in India: the Nath Jogi. These are tantric ascetics, also known as siddhas. They withdraw from the world. This withdrawal makes them potent and powerful, giving them magical powers. They can fly through the air and change shape and size. No damsel can seduce them.

In fact, they overpower even the yoginis who gain power from sexual intercourse. They are linked in many ways to Hanuman who also gets his superhuman abilities through celibacy and the practice of asceticism. Nath Jogis are very different from monks, who focused on detachment and equanimity. Their fame came from their magical powers. Nath jogis were imagined riding around on tigers and lions. Many Muslim Sufi faqirs fell in the same category.

When these jogis died, they were buried in seated positions and their tombs became holy sites with the power to solve problems of daily lives like finding a lost animal, curing a sick child, enabling marriage and resolving disputes. Many of these ascetic clans inspired martial orders, creating warrior-monks who defended temples and participated in holy wars.
In the Bhakti period, a new type of sanyasi emerged. One who did not want family, one who did not want magical powers, one who was not a withdrawn intellectual, rather someone who danced and sang ecstatically immersed in the idea of God. These bhaktas, both male and female, saw themselves as women serving a higher power. They were indifferent to worldly power and fame. In their presence, even tigers became friends with goats.

In the 19th century, the monastic orders were strongly influenced by how the Christian church saw celibacy. Here, men took the vow of celibacy and poverty to serve society. They became part of missions to help humanity via social service. This is very different from the old ascetic practices of gaining equanimity. It is also different from the ascetic practices of Nath Jogis to attain magical powers.