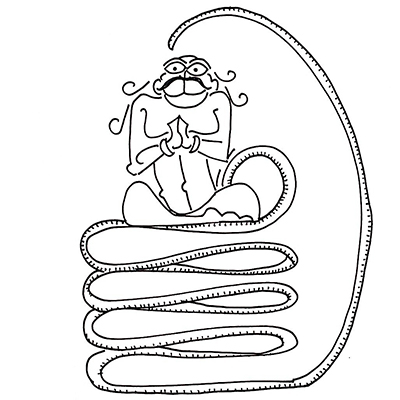 Published on 21st September, 2018, in The Economic Times

Hanuman knew how to rile up Ravana. Ravana was a powerful king, who thought he was better than others. But Hanuman knew he was an insecure man who needed to assert his authority over others constantly. So, when presented in Ravana’s court, he spoke in chaste Sanskrit and demanded that Ravana give him respect due to a king’s messenger.

Here was a monkey speaking in chaste Sanskrit. How could that be? Ravana was confused. He saw a monkey but heard the language of the gods! Was this an animal or a Brahmin? Surely, respect did not depend on form, human or animal? Ravana, a Vedic scholar, did not have the wisdom to recognise a wise creature. Instead, he became insecure and mocked Hanuman, considering him a pest at best. ‘If you don’t give me a seat, I shall make a seat for myself,’ said Hanuman. He extended his tail, coiled it, and made a seat for himself.

Only this seat rose higher than Ravana’s throne. Suddenly Ravana who liked looking down on people had to look up in order to talk to Hanuman. He did not like it one bit. His was furious. Hanuman chuckled. It was so easy to upset this supposedly educated man. Ravana got so mad that he ordered Hanuman’s tail be set on fire. When this was done, Hanuman swung his burning tail this way and that, and it ended up setting Ravana’s palace on fire. This rather comic episode from the Ramayana is a study in human psychology.

Ravana embodies the powerful educated men we see around us whose power and knowledge have not made them wise. They use power and wealth not to liberate themselves from their insecurity but to barricade themselves from supposed threats to their imagined self-worth The higher they rise, the more scared they get, terrified of being pulled down. You find Ravanas everywhere. Knowledgeable, but not wise. Powerful, but but anxious. In Vedic tradition, true wisdom meant rising above insecurities and becoming generous. True wisdom meant giving power rather than capturing power.

Hanuman is powerful. So he does not have the need to intimidate people. He presents himself as a monkey, playful and mischievous, bowing to Ram, happy to be a servant, when everyone knows this little monkey can turn into a giant, fly across the sea, sprout five to ten heads to become Mahabali, conquer ghosts and goblins and even rescue Ram. He does not have to display his power. He does not have to make you feel powerless.

Mythology is full of characters who help us make sense of the world and negotiate our way through life. The gods and demons of the Vedas and the Puranas are meant to mirror humanity. Ravana is glamorous with his 10 heads and 20 hands and golden city and flying chariot. He is a scholar–expert in Vedas, architecture, music and astrology. But that does not make him generous or humble or kind or polite. He gets pleasure in making fun of a monkey and even tries to burn a monkey’s tail. It reveals that all that education has not made him kind, or considerate, or large hearted. Knowledge and power makes him pompous, chuckle at human shortcomings. Wisdom has nothing to do with education. It is about empathy. Ravana lacks empathy and so does not really care for anyone, not even Lanka. He feels the kingdom exists for him; he does not exist for the kingdom.

Leaders often behave like Ravana. They are glamorous and entitled. And they use their power to dominate and be territorial. In art, Ravana is shown trying in vain to carry Shiva’s mount Kailasa. Shiva embodies detachment while Ravana embodies attachment. The tension between the two is obvious.

Ravana wants to possess Shiva who possesses nothing. Ravana is the very opposite of Shiva who he venerates. In folk traditions, Shiva becomes Hanuman to teach Ravana a lesson. But the Brahmin-king of rakshasas refuses to learn.

The journey from Ravana-type leader to Hanuman-type leader is a tough. Western management gurus use words like servant-leadership model. The language here is still feudal. Hanuman is not a servant though he calls himself Ram-das. Hanuman chooses to serve Ram but Ram does not seek or demand his service. Nor does Hanuman seek Ram’s gratitude. Servitude assumes obligation. Here service being offered is voluntary. Hanuman is being generous.

He does not expect anything in return, for he enjoys the pleasure of being generous, and glad that Ram is letting himself be the recipient of generosity. These ideas are often trivialised as spirituality. But they are at the core of making leaders good human beings.