How Hindus of Andaman and Nicobar Rejected Religious Bigotry, 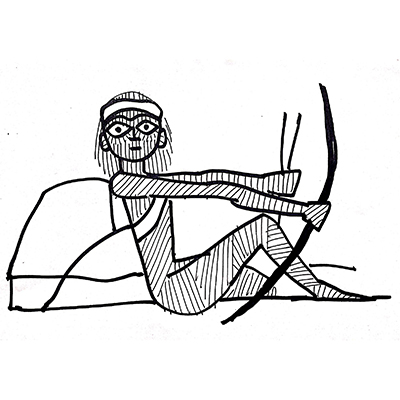 Located where the Andaman Sea meets the Bay of Bengal, Andaman and Nicobar is a string of over 500 islands, of which only over 30 are inhabited. The northern islands are called Andaman and its original inhabitants comprise the “Negrito” tribes (Onge, Sentinelese, Jarawa) who came over 50,000 years ago as part of the Out of Africa migrations.

The indigenous Andamanese genes are, thus, the oldest in India. The Southern islands are called Nicobar, inhabited by “Mongoloid” tribes (Shompen, Nicobarese), who probably came later, with the Austroasiatic migrations from Southeast Asia.

These tribes are hunter-foragers, use stone implements, and are rather isolated from the rest of the world. Since the tribes prefer to isolate themselves, babies that are not born of inter-tribal union, or in other words, babies born through contact with outsiders, are killed or discarded. Such tribal isolationist behaviour is common around the world. Tribal Andamense lore speaks of a deity called ‘Puluga’, who created men from bamboo and women from clay, but abandoned humans after they disobeyed his food taboos. Dreams are used to communicate with spirits.

Sri Lankan Buddhist chronicles, Dipvamsa (3rd-4th century CE) and Mahavamsa (4th-5th century CE), possibly refer to Nicobar when they speak of Naggadipa, ‘naked island’, perhaps the ‘island of naked people’ referred to by Chinese traveller I-tsing. As per legend, this island was visited by their founder-prince Vijaya when he travelled from his homeland of Kalinga to Sri Lanka.

Rajendra Chola I established contact with these islands 1,000 years ago as a naval base. A Tamil inscription dated then names this island as Ma-Nakkavaram, ‘great island of naked people’.

About 800 years ago, European traveller Marco Polo referred to this island as ‘Necuverann’. The Chinese mariners of the Ming period refer to Nicobar island as ‘Cui Lan island’ in their maps. Kanhoji Angre of the Maratha empire probably established a temporary base here in the 18th century and fought the Europeans.

The old Prakrit and Tamil name of ‘naked island’ such as Nagadeepam may have led to the modern name Nicobar used by Europeans when they reached the islands 250 years ago. Diseases such as malaria made it difficult for them to settle on the island, though the Dutch, Austrians, and Italians tried.

The arrival of Europeans also spread fatal diseases amongst local tribes. The British finally established a naval base there in the 18th century. After 1857, the British decided to transport criminals there for whom they built the infamous Cellular Jail. The islands were briefly occupied by the Japanese during World War II, and they became part of India in 1950.

Forced (prisoners) and voluntary (indentured labourers, traders, refugees) migrations mostly from India (Tamil Nadu, Odisha, Bengal, Andhra) in the last 100 years has resulted in the local tribal population being reduced to a minority. Muslim traders from Lakshadweep, and later Gujarat, visited these islands and married local women, as did migrants from Burma, Malaysia and Indonesia. Islam was introduced by these traders.

The Dutch introduced Christianity and this was continued by English missionaries, which is why many Nicobarese are Christians today. The migrations to the island were intensified during World War II and during Partition. While most tribal populations follow their own faith, 70% of the rest are Hindus, 20% are Christian and 10% are Muslim, approximately.

Bhantu is a ‘low’ caste from Uttar Pradesh whose community members claim that their ancestors fought alongside Rana Pratap and that they were later denied their kshatriya status and access to lands, and so were forced to rely on dacoity to survive. They fought the British and about 300 were captured and sent to Cellular Jail in the early 20th century.

After release, some tried to return home, even exhuming bodies of the dead to cast their bones in the Ganga, but soon returned as they had no source of livelihood there. Back in Andaman, their allotted lands had been claimed by locals, so they had to resettle on other islands. There they married women from other castes and very few descendants still remember their dialect.

Hinduism amongst the Bengalis in Andaman, who migrated from East Bengal during the Partition, is not the Brahminical variety but the Bhakti variety that speaks of social equality and devotion to God (Hari, ie Vishnu-Krishna). It reveals practices found in the ‘low’ caste groups.

The Namashudra Bengalis refer to themselves as matua-panthi, the drunken group, or rather those drunk in the love for God, and their ritual involves communal singing of songs praising God (keertan). The communal singing leads to dancing and ecstatic trance. There is no temple; the sacred space is created through song and music.

The lyrics composed by their gurus in the 19th century speak of the mystical yogic body, revealing influence of Tantrik-Baul-Buddhist traditions, and reject all association with land (desh) or lineage (kula).

Disregarding the importance of geographic pilgrimage (tīrtha), Matua ethics and doctrines suggest the idea of locating the holy place within and around oneself. There is belief that desire (kama) pulls the energy (kundalini) down but devotional songs (keertan), and movement of the left and right sides of the body (ida and pingala) through musical instruments and dance, raise energy up the spine, towards the opening of the third eye (ajna).

Modern Hinduism in the form of communal celebrations of Ganesha and Durga are getting popular, as is Hinduism spreading via Bollywood, television serials, gurus, and music industry.

Isolated from the mainland, the Hindus of Andaman and Nicobar Islands feel no obligation to be bound by casteism, or religious bigotry. Perhaps because much of the migration was from homogenous communities, which were poor and downtrodden anyway, and hence no incentive to sustain traditions of caste pride.

Inter-faith dining and marriage is also fairly common as is conversion. But Hindutva fears there may be more conversion out of Hinduism than into Hinduism, if one is not vigilant. Let us not forget that in 2018, an American evangelist youth tried to enter forbidden tribal territory secretly but ended up being shot dead by its inhabitants.