How Hinduism Flourished in Kerala 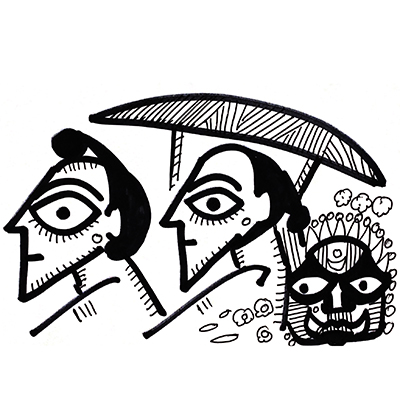 As per legend, the western coast of India, Kerala especially, came into being when the sea recoiled in horror on receiving Parashuram’s axe soaked with the blood of the many kings he had killed. He had killed them because they had failed to uphold dharma. They exploited the meek, rather than enabling the meek. Parashuram then distributed the exposed land amongst Brahmins. Since Brahmins were forbidden to own property, he created a new set of Brahmins by resurrecting those who were being cremated on the seashores, as per one folklore. Since Brahmins did not know how to till the land, he got people from other lands to create rice fields. As these migrants were now servants, who needed instructions, they were called shudra. New communities emerged when Brahmin men married Shudra women. These legends come from local folklore including Kerala-mahatmya and Keralolpatti, traceable to the 16th century.

Parashuram wanted Brahmins to transmit land not to their sons but to their nephews, born of the sister. This was Parashuram’s way of atoning for the sin of killing his own mother (on his father’s orders but resurrecting her later) for the crime of alleged adultery. Temples associated with Parashuram’s resurrected mother, Renuka, are found in the northern part of the western coast. Matrilineal customs are found in the southern part. Not all Brahmins agreed to matrilineal property transmission. Parashuram was further disappointed with the Brahmin behaviour. Though asked to collaborate, they kept competing with each other, seeking more land and more power, rather than focusing on governance.

So Parashuram asked the Brahmins to get a king from a neighbouring land to settle their dispute. This king would govern the land and be responsible for it. He would be dethroned if he ever saw the land as a source of power and pleasure. These kings were called the Perumal kings of Chera who ruled between 9th century and 12th century. These Perumal kings were deeply influenced by Adi Shankaracharya and introduced the elaborate caste system that Kerala would later become infamous for. The last Perumal kings as per one legend converted to Islam as he saw the miracle of the splitting moon. Other legends say he left the throne as he had broken the code of never enjoying the land he was sworn to protect and govern.

The earliest scientific evidence of kings of Chera-bhoomi (which later came to be known as Kerala-bhoomi) comes from the inscriptions of Ashoka 2300 years ago. This was probably a land where people spoke a proto-Tamil language until the 10th century at least. It was a sliver of land between the sea and high mountains, rich in coconuts and herbs, occupied by toddy trappers, fisherfolk and tribes well versed in hunting elephants, catching snakes, and gathering medicinal herbs. Kerala evolved in two distinct ways: the cosmopolitan coastal parts exposed to traders from around the world, including Jewish, Christian, and Arab traders who married local women, and respected matrilineal practices. The conservative hinterland was agricultural, hence with relatively more temples and Brahminical control.

For centuries, the locals worshipped spirits and gods associated with mountains, trees and rivers. They also worshipped the spirit of dead heroes and kings that were summoned in elaborate ceremonies involving song, dance, music and elaborate masks and make-up. We still see these practices in rituals known as Theyyam in North Kerala and Bhoota-kolam in South Karnataka. These spirits were summoned to drive away ghosts and malevolent spirits, to cure diseases and snake bites, to usher in good luck. This gave rise to the practice of all kinds of sorcery that Kerala became famous for.

Rice cultivation was probably introduced by Brahmins who migrated to the land from the North, maybe as early as 5th century AD. These Brahmins brought with them Sanskrit language, and Vedic culture, but also the newly emerging ideas associated with temples, known as Agama Tantra, through which spirit-gods could be embodied in images and icons, and given a temple home to reside in. Such Brahmins became rather popular and were invited by southern kings, and offered these newly embodied deities, and their Brahmin caretakers, agricultural land grants for the upkeep of the temple. This Brahmin control over common land probably popularised the legend of the dwarf-like Brahmin who turned into a giant and claimed all the land of the erstwhile king of Kerala, Mahabali, whose return once every year is celebrated as the harvest festival of Onam.

Ambalavasi were Brahmins who lived in temples and managed temple ceremonies and land. They were representatives of the gods, and effectively the landlords. Only the eldest son would be allowed to marry to avoid property disputes. The other sons were permitted to have relationships with daughters of local chiefs, the Nairs, and with courtesans, who were independent women. The story cycle Parayi Petta Panthirukulam composed in the 17th century proclaims how Brahmin fathers produce great sons, no matter which family the child is raised in, even if the mother is ‘low caste’. This is when the term Nambudri, a word of uncertain etymology, emerges to identify the Kerala Brahmin.

The local women did not understand concepts like marriage or fidelity to a man. They had many lovers, and their daughters inherited the property, which were managed by their brothers. The warrior Nair communities have stories of many Brahmin sons-in-law, while coastal mercantile people speak of Jewish, Christian and Muslim sons-in-law. These were the maha-pillai, or the great-sons, from which comes the term Mapplai or Mopplah.

After the legendary Chera period that ended in the 12th century, Kerala was fractured into a set of feuding kingdoms, which resisted Chola invasions, created their own unique identity distinct from Tamilakkam, and eventually became British feudatories. Between 10th century and 16th century, the Malayalam language emerged, distinguishing itself from old Tamil, with the help of Sanskrit, via an intermediate literary language known as the pearl-coral tongue (Manipravalam).

Brahmins always shaved their head, but not entirely, to differentiate them from Buddhists and Jains. A tuft of hair was tied and turned into a bun (shikha). Brahmins who tied the bun in front, were said to be the older migrants. Those who tied the bun behind were the later migrants. Adi Shankaracharya, the most famous child of Kerala, was born in the 8th century in the family of earlier migrants, long before Malayalam was spoken. He travelled from south to north, probably pioneering the idea of pilgrimage that changed Hinduism forever.