How Hara and Hari Helped Kings of Cambodia 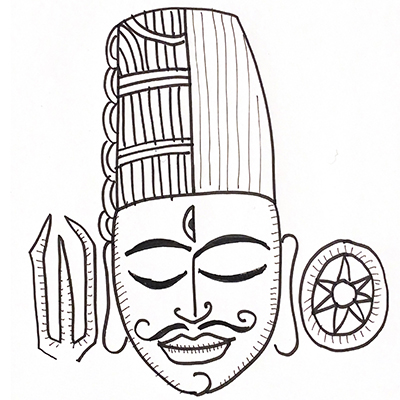 In the 5th century AD, i.e. 1,500 years ago, the Gupta kings rose in India. They were amongst the earliest royal families to establish themselves through a Hindu framework. Following the Gupta period, trade with Rome was disrupted, as the Roman Empire collapsed. But trade from the eastern coasts to Southeast Asia thrived. In regions now known as Vietnam and Cambodia we find the Hindu kingdoms of Champa and Khmer.

The Champa Kingdom lasted from the 3rd to 13th centuries. In the coastal part of Vietnam, we find temples dedicated to Brahma, Vishnu and Shiva. While the Hindu trinity is found in Vietnam, in Cambodia a different pattern is seen. In the northern inland part of Cambodia, there are a lot of Shiva lingas. While on the southern coastal part, we find a lot of Vishnu statues. There are also carvings that show ascetics as well as apsaras. They reveal an exposure to Hindu thought, where there’s constant tension between the material and spiritual world, the world of pleasure and the world of renunciation. In other words, 1,500 years ago, Hindu ideas had spread out beyond India to Southeast Asia. They had planted themselves, in the farthest regions of Southeast Asia, that is Vietnam and Cambodia.

Shiva linga is aniconic i.e., a geometric not human shape, while Vishnu images are shaped like a human, but with four arms. The Shiva linga was a smooth pillar, planted in the ground and identified as Shiva’s phallic symbol. The earliest Shiva linga found has a close anatomical relationship with the human penis. Later ones are more symbolic: the lower part is octagonal and the upper part is circular, indicating a shift from finite to infinite. This is planted in the ground to indicate the king’s claim over surrounding territory. On the coastal areas, the four arms of the Vishnu images hold a shankh (conch), a chakra (wheel), a gada (mace). But, instead of a lotus flower, one often finds a spherical object. This is identified with the earth or Bhumi.

Harihara and the ruling dispensation

Cambodian coasts were more developed than the inland, as the coasts were trading with the world they more refined. Vishnu is found on the coast and the more fierce and savage Shiva is linked to the wild interior. Refined Vishnu wears fabric and jewellery. Wild Shiva wears animal hide and is so terrifying that he is best represented symbolically. Shiva is called Hara, who claims. Vishnu is called Hari, who benefits. Thus the king as Hara and Hari first claims, or conquers, then brings prosperity, like the generals and governors of the ancient Roman empire.

How did these images reach Vietnam? The traditional explanation is that sea-faring merchants travelled from the coasts of India to Southeast Asia. They were trading in spices and cloth. Indian textile was much sought after in Southeast Asia. Southeast Asian spices were in high demand, not in India but beyond, in Rome. But most traders were Buddhists. It is an easy explanation for the spread of Buddhism in these regions, especially in Burma, Thailand, Sri Lanka. But in the faraway lands of Vietnam and Cambodia, where Hinduism planted itself, the spread took place through a special group of people known as Pashupata Shivas.

These people practised a different form of asceticism. They spoke not of giving up the world but of harnessing and transmitting special spiritual power called Siddha, obtained through asceticism. This power of the gods could be brought down from the spiritual realm to the human realm. It could elevate a common man to the status of a king and create a kingdom filled with prosperity, pleasure and security. Through the body of the king, the realm of the gods would intermingle with the realm of humans. They connected the human world with the divine world through the king. Naturally, they were invited by powerful warlords who wished to be kings.

Both these ideas distinguish themselves from Buddhism. Buddhism spoke of renunciation and the generation of merits by making gifts to monks. The Shiva ideology by contrast spoke of making the king powerful. The Vishnu ideology spoke of the king’s power being used to bring prosperity to the land, stretching around him like the four arms of Vishnu. These two forms of kingship were widely spread in the Vietnam and Cambodia regions. Shiva’s thought was more inland while Vishnu’s was along the coast

Then between the 7th and 8th centuries, we find a shift. We find the rise of what is called Harihara images. Now we have images of a god with four arms. One half of him is Vishnu and he wears a golden crown. The other half is more ascetic and wears tiger skin and has matted locks. This indicates the conquest of the Vishnu regions by kings who saw themselves as forms of Shiva. But in typical Hindu style, the Vishnu images were not replaced. Shiva merges with the Vishnu images to create Harihara, and this is a point to note for distinguishing Hinduism from other forms of kingship. There is even a place called Hariharalaya, indicating the temple of fused gods near Siam Riep.

Often the king was seen as Shiva, free to do as he pleased, while governance was managed by Vishnu, who manifested as Ram and Krishna, whose epic battles were carved on the walls of later temples. These epic battles of Ram and Krishna were first seen in Central Java island of Indonesia on the walls of the Hindu temple of Prambanan in the 9th century. It inspired Khmer kings of Cambodia to do the same in their Angkor Wat temple complex of the Mekong Delta in the 12th century.

If the king accepted the Buddhist way, then the older Vishnu and Shiva images would have been wiped out. But by staying within the Hindu fold, we feel the older gods are not being wiped out but merged into the body of one god. Thus, the rise of the Harihara images indicates a union of Shaivism and Vaishnavism. It depicts a desire to amalgamate two rival ideas rather than supersede the rival idea. Shiva and Vishnu though rivals were part of the same Hindu scheme, opposing the Buddhist scheme. Some Hindus tried to make Buddha an avatar of Vishnu, while some Buddhists tried to make Shiva and Vishnu the fierce and gentle Bodhisattvas who are guided by Buddha. But generally, Buddhism and Hinduism remained rivals.

Across India, we find Harihara images too. The famous Lingaraj temple in Odisha is dedicated to Shiva and built under Pashupata influence. But the rituals involve offering not just bilva leaves, which are a favourite of Shiva, but also tulsi leaves, a favourite of Vishnu. Lingaraj is thus identified as Harihara. It must be kept in mind that the older kings of Odisha were Shaiva. It is they who built the temples in Bhubaneshwar. But the later kings were Vaishnava. They worshipped at the temples on the coast of Puri. But, realising the value of keeping amity in the kingdom, between rival factions, they promoted the idea of Harihara. Thus even Jagannath is seen by many as a form of Shiva, a kind of Bhairava. This syncretic tradition, which you find in Vietnam, Cambodia and Odisha, even in Tamilakam, through the image of Harihara, is a reminder of the syncretic and the conciliatory power of Hinduism. The point of change is never to replace the old, but simply to add to the old.