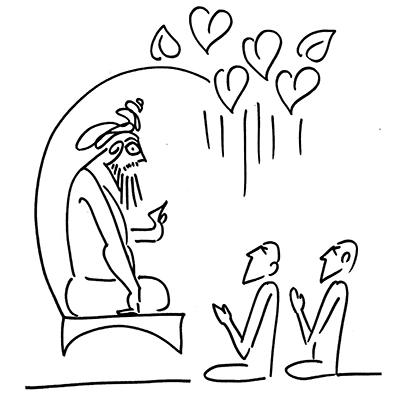 For many people, ‘guru’ is no different from a church elder, or even a prophet. Just as a prophet has direct access to God and communicates God’s will to people, many people believe that their guru has direct access to the divine and presents the wisdom of God to them. If the guru becomes a prophet, then his ashram becomes the church and the satsang that he presides over becomes the congregation, where the knowledge of the God is transmitted to people. The holy book then becomes the guru’s most favoured book, either the Isha Upanishad or the Yoga Vasistha or the Bhagavata Purana or the Yoga Sutra or the Bhagavad Gita. Bhakti then becomes like the concept of surrender. You have very clear dos and don’ts, and paap and punya become that which the guru disapproves or approves, that which can take you to hell or paradise.

Brahmacharya — the vow of celibacy, chastity and poverty — becomes important, much as in the case of priests in the Catholic church. The ashram then starts providing school and hospital services, which is what made the church very powerful and famous around the world. Sunday schools are organised to teach Hindu values. Hindu model of conversion becomes the shuddikarna or purification ritual. You are purified away from the old ways of thinking to the new ways of thinking. Ideas that didn’t exist before, the idea of a superior god and an inferior god — which does not exist in Hinduism — start being introduced. Therefore, god becomes transcendental and hierarchy is created with some forms of Hindu gods such as Shiva or Krishna becoming more important than Vishnu or Devi, or the formless Nirgun Brahman becomes more important than Saguna Brahman, which has form.

Then Hinduism becomes about a belief that one has to cling to, no matter what arguments are presented. This is very different from the dynamic nature of Hinduism, which, proposed by yoga, is about the unknotting of the mind, expanding it. In yoga, there is no singular belief; the ideas keep changing as the mind expands following exposure to more ideas.

The Christian template of loss becomes part of Hindu paradigm. The fall from Eden, the return to Jerusalem and the great martyrdom with suffering under the Roman kings are the main themes in the Gospels. These themes become similar to the idea of Hinduism being weakened by Buddhism or destroyed by Islam, and the need to reclaim it, through books such as Arise Arjuna, or Awaken Bharata. Dharma Sankat becomes about threat to religion and Dharma Sthapana becomes the reinforcement of religion. The word ‘Ekam’ becomes about unity and equality rather than figuring out the underlying principle — the common denominator that binds all diversity.

Despite saying that Hinduism is totally different from Christianity, the model adopted by many gurus seems to be that of Christianity itself, often evangelical and charismatic movements popular in the USA. Therefore, many Hindu organisations see themselves as missions, and find great joy when white people adopt Hindu names. Those who spread the guru’s words are no different from evangelists who are spreading ‘the good word’ and the guru himself becomes much like the charismatics, the leaders of Born-Again movements, who can say anything against science with a chuckle and a twinkle in his eyes, and that is someone seen as reinforcement of mysticism and spirituality.

In gurudom, we suddenly find white people taking Hindu names and titles like sadhvi, guruji, shastri and pandit almost instantaneously after contact with the guru. This is a privilege not given to a Dalit man in India. If you are a Dalit, you cannot just learn Sanskrit and become a Brahmin. However, if you have white skin, then just a few words of Sanskrit will make you a Brahmin, instantaneously. This upper caste and upper class nature of popular Hinduism being transmitted around the world through gurudom is often overlooked. Few realise that the gurus are unknowingly or very strategically using models of institutional building used by various Catholic and Protestant groups around the world.