How Did Tantra Spread from India to Tibet? 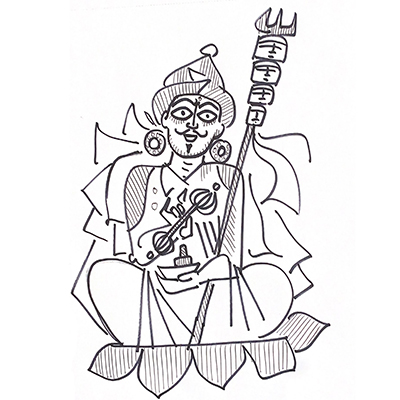 Tibetan Buddhism is called Vajrayana Buddhism, which is sometimes also called Tantrik Buddhism. Here, women play an important role, which is why the symbols of Vajrayana Buddhism are a double-sided dagger (vajra) and the bell (ghanta), representing male and female principles, which in turn represent the spiritual and material realm. Another symbol of Vajrayana Buddhism is the use of a skull. Teachers hold skull mounted staff (khatvanga) in their hands. If the presence of female represents sex and life, the presence of skull represents violence and death. If Theravada Buddhism valued the solitary pursuit of meditation in caves, if Mahayana Buddhism spoke of Bodhisattva as a saviour of the suffering, Vajrayana Buddhism speaks of magical powers or siddha that allows the practitioner to fly in the air, walk on water, enter and animate corpses, fight demons, have knowledge of every dimension of space and time.

The Buddhist schools were reactions to Hindu schools and vice versa. The nirvana-seeking Theravada, or the old school of Sakyamuni Buddha, countered the Vedic school that invoked gods like Indra for wealth, power and success. Vedism then adapted itself by valouring the householder’s life over the hermit’s. And so Puranic tales emerged where Shiva, the hermit, marries and becomes householder in order to uplift humanity spiritually. And Vishnu, the householder, manifests in various avatars to solve humanity’s many problems. In response, Buddhism transformed into Mahayana Buddhism, with multiple Buddhas and Buddha worlds, and Bodhisattvas, who are compassionate and listen to the cries of the suffering.

Theravada spread in the southern direction towards Burma, Sri Lanka and Thailand. Mahayana spread in the northern direction towards Central Asia, China and Japan. Both were patronised by kings. Protectors of Theravada Buddhism were seen as kings, while Mahyana Buddhism saw kings as manifestations of the Bodhisattva. Likewise, Vedic rituals such as Ashwamedha were designed to transform warlords into kings, while Shiva and Vishnu provided kings with the framework of social responsibility or dharma. With the rise of Tantra, in Buddhism and Hinduism, things changed once again. These changes happened over 1,500 years from 500 BCE onwards.

Both Tantrik Buddhism and Tantrik Hinduism spoke of magical powers — Siddha. Sex was no longer a threat to the hermit; sex was a tool that a hermit could use to become more powerful. In Puranic Hinduism, apsaras like Menaka enchanted tapasvis like Vishwamitra. Shakti forces Shiva to lead the domestic life. But in Tantrik Hinduism, the aspsara becomes the yogini. Sex was not for pleasure or for children: it was to harness spiritual power. The point was to satisfy the woman without feeling the need to spill the semen (virya). Such control is what made the monk, a hero (hero). Instead of losing bodily fluids into the female, the male would absorb bodily fluids and regenerate tissues, and regain power over elements, plants, animals and the mind.

Tantrik Hindu stories now survive mostly in the oral traditions of Nath-jogis who rejected household life and wandered the countryside singing tales of how Goraknath liberated Matsyendranath from ‘the kingdom of women’, and so triumphed over life and death. This was overshadowed by Bhakti Hinduism, where erotic energy is tranformed into emotional energy. The Tantrik Gita Govinda is toned down and a greater focus is given to delight and love. This Bhakti Hinduism prevails over Tantrik Hinduism in much of India. Pre-Bhakti Tantrik Hinduism once thrived in Southeast Asia and now survives in few places such as Nepal and in certain rituals of Kerala. But in Buddhism, Tantra was not overshadowed by Bhakti. It remained, almost frozen in time, in the Himalayan regions from Bhutan to Ladhak.

Padmasambhava took Tantrik Buddhism from India to Tantra in the seventh or eighth century. He was a contemporary of Adi Shankaracharya. If the latter is credited with removing Buddhism from India, then the former is credited with taking Buddhism to the Himalayas. Adi Shankaracharya was a celibate monk, who was familiar with Tantrik practices. By contrast, Padmasambhava had two wives, an Indian and a Tibetan, who were also his students and partners in sex rites that opened the gateway to Siddha powers. So the great leader of Vedanta Hinduism was a celibate monk like Buddhists of yore while the great leader of Tantrik Buddhists was a householder like Vedic Brahmins of yore. This shows how the two faiths influenced each other, in imagery as well as practice.

Padmasambhava’s birthplace, Oddiyana, was earlier identified with Swat Valley in Pakistan. But now scholars are convinced Oddiyana was Odisha. The Hunas had destroyed most Buddhist centres in northwest India by the fifth century, and by the seventh century, the region was under Islamic influence. Muslims frowned on all idol worship and occult practices.

The word for ‘idol’ in Persian dialects is ‘but’ derived from ‘Buddha’. During this time, Tantrik Buddhism thrived in Bengal, Assam, Mithila, Odisha. Circular roofless temples were being built to 64 yoginis in Bhubaneswar. This thrived until the Islamic invasions of the 12th century after which Vaishnavism and Bhakti soared in popularity. This connection of eastern India with Tibet needs to be acknowledged.