How Did Hinduism Come to Dominate India? 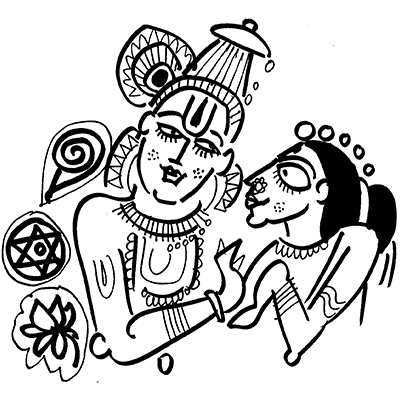 Today, Jainism still maintains a tenacious hold in mainland India. Buddhism, however, survives only along the rim of India, in the Himalayan regions, and beyond, in East and Southeast Asia. Buddhist revival in India happened only in the mid-20th century as part of the anti-caste movement spearheaded by Babasaheb Ambedkar. How did this happen?

The simple, and lazy, explanation is that Brahmins appropriated Buddhism and Jainism by declaring Buddha and Tirthankara Rishabdeva to be avatars of Vishnu. But things are not so simple.

Buddhism appealed to the mercantile community as it rejected the idea of atma, and told people they were not beholden to any family, clan or caste obligations. In other words, it valued individual entrepreneurial spirit.

So Buddhism spread wherever mercantilism spread. It followed, or even led, the creation of markets, first the urban centres of India during the great trade with the Persian and later, the Roman Empire. Buddhism then spread along coasts and islands of Southeast Asia with the emergence of the spice routes.

Finally, after the collapse of the Roman Empire, it moved out to the Northwest along the Silk Roads to service Chinese masters in the seventh century. In most regions, except China, it was later challenged by the rising force of Islam, which also favoured mercantile ecosystems.

In its heyday, Buddhist mythology also sought to appropriate Hindu gods. No one talks about this. In Buddhist art, Indra and Brahma are shown bowing to Buddha. Thus, Buddha’s wisdom was shown to be greater than what Indra and Brahma represent, ie Vedic worldview.

In Tantric Buddhism, fierce forms of Buddha are shown crushing Hindu gods like Shiva, Yama and Ganesha, indicating competition with Puranic Hinduism. Buddhist cosmology states how the realm of Buddha is located above the realm of the 33 gods of the Vedas. This reveals the competitive spirit of Buddhism.

One of the reasons Hinduism survived is because the Brahmins favoured the village over the city, the agricultural settlement over the market, the stability of rural economy over the vagaries of the market. Brahmins were hostile to traders — they forbade sea travel. They championed regionalism, as they found refuge in local gods.

Jains survived only because they integrated into the village caste system, by maintaining strict rules of marriage and food consumption, something Buddhists did not do as they did not believe in the existence of atma, and so doctrines of purity. Monks crossed seas to Southeast Asia. Brahmins refused to, because of their own rules, and so Buddhism mainly, not Brahmanism, established the great kingdoms along the spice route.

Buddhism and Jainism declared men who protected monks and the monastic order as kings. Kings, who depended on merchants for their income, supported these monks. But Hinduism saw kings not as mere guardians of dharma but as fountainheads of dharma, forms of Vishnu and Shiva, on earth.

Brahmins helped create concentrically designed kingdoms or raja-mandalas where the king lived with priests and gods in the centre, while everyone else, including merchants and peasants and servants lived in the periphery. This fed into the ego of ambitious warlords and tribal chieftains who naturally preferred the Hindu system of caste hierarchy, over the austere, egalitarian and mercantile ways of Jain and Buddhist monastic orders.

Hindu gods danced and sang. Shiva dances, Vishnu dances, the goddesses dance. These dancing gods are missing in Buddhism and Jainism. The Buddha and the Tirthankara sat still in a meditative stillness. For the common man, dancing and singing was part of life. Thus, they were drawn to the religion where gods danced and sang. The contemplative meditative austere religions lacked popular flavour.

Furthermore, Buddhism and Jainism transformed local gods into inferior beings. They became yakshas and yakshis serving as guardians and attendants of the Buddha and the Jina. However, in Hinduism, the folk gods were seen as local manifestations of Vishnu and Shiva. Thus, their status was guaranteed. Ram and Krishna, for example, were avatars of Vishnu. But in Jainism they were inferior to Tirthankara and in Buddhism not quite equal to Buddha.

From the eighth century we find the rise of Tantra and goddess worship. The goddess became equal in stature to Shiva and Vishnu of the Hindus, but the female form was never given equal status in monastic orders. As Tara, she became powerful in Mahayana and Vajrayana Buddhism, but nothing compared to the status given to Durga and Kali in Hinduism.