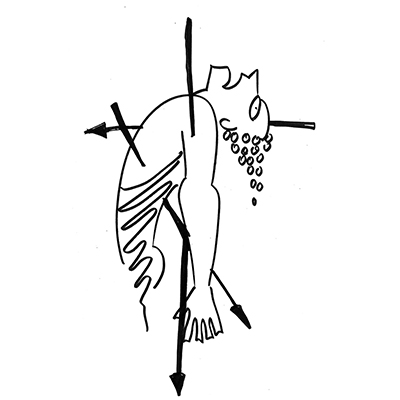 Buddha had a cousin who often argued with him and opposed him. His name was Devdutt, or Devadatta. He was also Buddha’s brother-in-law. People often ask me if I was named after this anti-Buddha. But I was not. I was named Devdutt because my mother liked the meaning, ‘gift of god’. It happens to also be the name of Arjuna’s conch and Narada’s lute. Dutta, the hermit son of Atri and Anasuya, visualised with a trident, a cow and four dogs, is often called Dutt-dev or Dev-dutt.

The Buddhist ‘gift of god’ had problems with the ‘awakened one’, who was once his cousin, Siddhartha Gautama of the Sakya clan. And there are many stories where Devdutt is presented as the antagonist to establish the Buddha’s character, and amplify his wisdom. While Devdutt is as charismatic and capable as the Buddha, his jealousy pulls him down, makes him the lesser of the two.

When they were children, Devdutt shot a swan, but the Buddha nursed the swan back to health, arguing that one who cannot give life must not take life. He wanted the monks to live a more austere life but Buddha believed in moderation. When the Buddha established a monastery, he asked Buddha to retire and let him run the institution; when the Buddha refused, he revolted and caused a division in the monastic order.

Devdutt’s envy and rivalry had manifested in previous lifetimes, too, according to the Jatakas. He was the king of Kashi, who, in a previous life, out of jealousy, tortured the patient ascetic, Buddha, whose words impressed the royal dancing girls. He was the stupid merchant who was caught and eaten by a yaksha. He was the water demon who was outwitted by the Buddha when the latter, as a monkey, stopped his troop from drinking water from the demon’s well and instead drink from the hollow of bamboo reeds. When Buddha was a monkey leader, who stretched over a ravine to help his troop of monkeys run over his back to cross over and escape hunters, Devdutt jumped fiercely on his back, breaking his spine.

Eventually, we are told that Devdutt got Ajatashatru to murder his father, Bimbisara, and having secured this royal friendship, ordered a mad elephant be sent to kill the Buddha. He even tried to get assassins to kill Buddha, asking them to roll rocks down a mountain to strike Buddha as he passed below. In his old age, filled with remorse, he sought Buddha’s forgiveness, but then he hesitated, and was once again consumed by thoughts of vengeance. Furious, the earth opened up, and Devdutt was swallowed in, and taken to a hell when he was impaled by spears.

Hundreds of years later, when Christian missionaries came to Thailand with the intent of converting Thais from Buddhism to Christianity, the king of the land saw them wearing images of Christ on the Cross around their necks. The missionaries identified Christ as their saviour. However, the King of Thailand and all his courtiers identified Christ as Devdutt impaled in hell for his anti-Buddhist activities. So, they concluded the new religion being presented by the Christian missionaries was actually Devdutt’s religion, and so anti-Buddhist in essence. So, they rejected Christ’s doctrine and strove to be faithful to the Buddha. Thus, ironically, though the enemy of the Buddha in his lifetime, in death, Devdutt secured the Buddhist faith in Thailand.