How Brahma Lost His Position 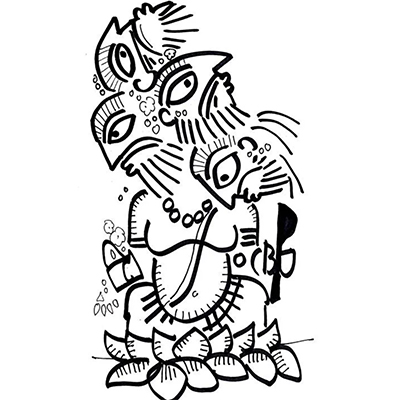 In Vedic times, 3,000 years ago, Brahma referred to ‘brahman’, the impersonal divine energy linked to consciousness, spirit and meaning. Gradually, in Puranic times, 2,000 years ago, the idea of a god named Brahma emerged. This god created all life and established codes of civilised conduct, and dharma. This shift can be seen as the result of two factors: the rise of monastic orders like Buddhism and Jainism, and the increasing participation of common folk who had little patience with complex rituals and abstract ideas.

In Vedic ritual manuals, Brahma was called Prajapati, god of progeny, who creates all living creatures in order to overcome his loneliness and to satisfy his hunger as per Brihadaranyaka Upanishad. In Mahabharata, Brahma tells Indra to perform rituals to remove the pollution resulting from his killing Vritra (a brahmin) and Namuchi (a friend). In Brahmanas, he takes the form of a boar called Emusha to raise the earth, and he takes the form of the fish who teaches Manu that dharma is about protecting the weak. These roles as boar and fish, that rescues the earth and establishes humanity, are eventually taken over by Vishnu’s avatars. In Ramayana, Brahma encourages Valmiki to tell the story of Ram. In Mahabharata, he encourages Vyasa to tell the story of the Pandavas.

In the Puranas, he is no longer self-born (swayambhu); he is born from a lotus that emerges from Vishnu’s navel. He is not all-knowing; he is inspired to create women by seeing Shiva’s half-female form. He is linked to passion (kama) and death (yama), and, so in opposition to Shiva who is the destroyer of passion (kamantaka) and death (yamantaka). Further, Brahma gives demons boons that create trouble in the three worlds; he rectifies the damage by seeking intervention of Vishnu, Shiva and Devi.

As per Jains scriptures such as Kalpasutra and Adipuran, culture is established not by Brahma, but by the first Trithankara (of this kalpa), Adinath Rishabha, who was identified with Brahma’s Vedic titles such as Prajpati and even Hiranayagarbha. While Brahma was called Hiranya-garbha or golden germ, that produces all life, Rishabha was called Hiranyagarbha as his birth was accompanied by a shower of gold. Rishabha teaches the world the 72 masculine crafts, the 64 feminine crafts, and divided the world into three categories of vocations: kshatriyas who govern, vaishyas who produce and trade goods, and shudras who provide service. His daughter Brahmi spread the art of writing, while his other daughter Sundari taught the art of counting and calculating.

Buddhism turned Brahma into a minor, even confused, god who venerates Buddha. As per Brahmajala Sutta, those who followed Buddhist path, could be reborn as Brahma gods in special realms, above earth and above the paradise of gods known as Brahma-loka. Here they would have long lifespans, and no suffering, as they moved towards the highest goal of nirvana.

In Buddhist art, Brahma is seen as requesting Buddha to teach his lore to the masses.

Brahma is shown adoring Buddha, serving him, attending to his needs, even guarding him. There is one story of a higher god who falls from a higher heaven after exhausting his merits into the lower Brahma heaven. He assumes he is the first being and deludes himself to be the creator of later beings—the creator-god Brahma.