How Bindumati, a Courtesan, Made Ganga Flow in Reverse 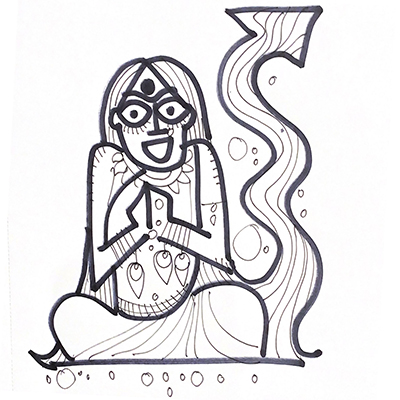 The story of Bindumati comes from the Buddhist text known as Milinda Panha, or questions of Milinda (Menander) which is a conversation between the Indo-Greek king Menander and the Buddhist monk Nagasena. The scripture is about 2000 years old and continues to be venerated in Burma. The story of Bindumati, the courtesan, draws attention to the role of integrity and equality in business.

One day, King Ashoka notices the Ganga is flowing south to north instead of north to south. Such an occurrence can only happen if it is the will of a person with genuine integrity. A search of the kingdom reveals it is the work of one Bindumati, a courtesan, well versed in the 64 arts of pleasure. The king is surprised she has integrity. On questioning she says, “She treats all her clients equally, if they pay her fee, irrespective of their social status, whether they are Brahmin, Kshatriya, Vaishya or Shudra.” In other words, she treats all those who pay her fee equally. She does not treat anyone differently based on their station in society.

But that is not how the world functions. We may all pay the fee of a restaurant but we notice that celebrities, politicians or the bureaucrat or the judge tends to be given special treatment and care. Bindumati does not do that. She treats all her clients equally and that makes her so special that she acquires magical powers often seen in chaste and faithful wives known as Sati. Equality here is a function of the payment made, and nothing to do with social status. Bindumati values people on grounds of what they pay her, and not on grounds of who they are.

We all speak how prostitution is the world’s oldest profession. While everyone else in the world exchanged goods in the market place – farm produce, animals, cloth – the courtesan offered entertainment services. She danced for you, sang for you, cooked for you, entertained you, even had sex with you, in exchange for a fee. Thus the hospitality industry began. We focus on the sex part with a puritanical lens, but in the days when there was no television or radio, it is the courtesan who provided a relief from boredom. In exchange, she asked for a fee. She was paid in gold and that made her cash rich and she often loaned this money to merchants and earned interest. They were so rich that they were taxed by kings and contributed greatly to the king’s treasury. In fact, the presence of talented courtesans in a kingdom indicated that the king patronised the arts and enhanced royal prestige.

Some courtesans were so rich that they gifted orchards and gardens to Buddhist monks to earn good merit in exchange. They engaged craftsmen to build caves for the monks where they could stay. They created ‘immortal treasuries’ which basically meant that they gave donations to monasteries on condition that the capital was kept untouched and only the rent was used to pay for the needs of monks. The donors in most cases were courtesans, the only women with independent wealth.

Curiously, despite benefitting from the donation of courtesans, a popular motif in Buddhist lore was the conversion of the courtesan, and her transformation into a nun, as we find in the 1500-year-old Tamil epic Manimeghalai. The courtesan’s profession was seen as indulging human desires while Buddhism was seen as the tool of outgrowing desires. This can be seen metaphorically. The courtesan represented the spirit of the market that thrives on needs and cravings of the customers while Buddhism was the means to outgrow needs and cravings in life. The middle path was when the courtesans gave a part of their earnings to the Buddhist monks for their upkeep and for the spread of Buddhist doctrine. This turned the market and the monastic order into collaborators and prevented conflict.

The story also refers to the value placed on equality. Buddhism rejected the Hindu idea of pollution that made Brahmins higher than Chandalas, and saw such ideas are market unfriendly. In the market, the customer is king. In the market all are equal provided you can pay the price for the goods and services. No one got a discount because of higher status. Bindumati who valued equality of her clients was so celebrated that it was said that she could do the impossible – make the Ganga flow in reverse direction