How Advaita Shapes the Indian Headshake 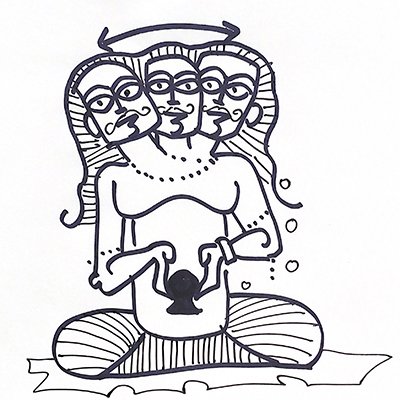 The most popular school of Vedanta is called Advaita. Advaita means non-dual. In English it is often translated as monism. But there is a difference between the structure of the two words. Advaita is refuting the existence of two. Monism is acknowledging the existence of only one, no other. Not two does not mean one.

This mistranslation happened as early translations of this work in English happened in the colonial context, when Christian monotheism was seen as the benchmark of religion. There was pressure amongst Hindu reformers to show Upanishad as the Hindu equivalent of the New Testament, with Veda being the Old Testament. The Veda focussed on sacrifice, while Upanishad on philosophy. Christian missionaries as well as Hindu reformers tried very hard to show how atma is just another way of referring to Almighty God. This tendency persists even today. And it impacts how we see business — where a lot of value is placed on the founder-innovator-owner, who claims all glory of success. His team is made of his archangels; he bestows his glory (goods or services) to the world (consumer).

In Sanskrit, we repeatedly hear the word “akhanda” often used to explain divinity. Akhanda means “not divided”, it is not the same as “united”. The Bhakti poetry of Maharashtra is called Abhanga. This means “not broken”, which is not the same as “pristine”. The use of the negation tries to communicate a fundamental idea of Indian thought — life depends as much on the other as it depends on the self, and while the other is not the self, the two are deeply interconnected: one cannot be understood without the other. You cannot explain matter without mind, and you cannot access mind without matter. Psychology does not exist independent of neurobiology and vice versa.

We cannot exist without flesh. Our flesh is created by the food we eat. Food is outside us. We eat it. It then becomes our flesh. Food becomes flesh. Our flesh is food for someone else. We eat and we can be eaten. We may separate ourselves from food, yet we are deeply connected. We are ‘not food’ yet ‘food is our flesh’. This is Advaita, non-dual. The Indian headshake, that simultaneously says we are not the apple we eat, yet the apple we eat creates our flesh, hence us, which makes the apple us. The relationship between flesh and food is similar to the relationship between the mind and the body. Without the body, there is no mind. Without the mind, there is no body. But are the two the same? Not quite. Advaita.

Business then is not the creation of the entrepreneur as capitalism claims. Or the workers as communism claims. It is a function of the market as well — the consumer, the competition, the investor, the regulator. Nothing exists in isolation. What we get from the market is a function of what we give. Our goods and services are the naivedya (food offering) and our revenue is the prasad (food gift). What we get is a function of what we give. What we give depends on our capacity and capability to understand the other’s hunger, needs and wants. If we are too consumed by our own importance, we will not be sensitive and receptive and adaptive of the market. We will fail. If we are too driven by the demands of the market, we will lose our own identity — forget who we are, and what we wish to offer to the world. Life happens at the intersection of the self and the other. Hence, Hindu gods are visualised as a pair — husband and wife, Shiva and Shakti, Vishnu and Lakshmi, Brahma and Saraswati.

Creation is the relationship between the one who feeds and the one who is being fed. One cannot exist without the other. A kitchen cannot exist without a cook. A kitchen has no value without hungry people. Who then creates the kitchen — the cook or the hungry people? Who creates your organisation — you, your employees or the consumer? If you seek a singular answer, you are monotheistic like the colonial masters of yore. If your answer is ambiguous, the Indian head bob, you are in the realm of Advaita.