How a ‘Ram Rajya’ Was Established In South 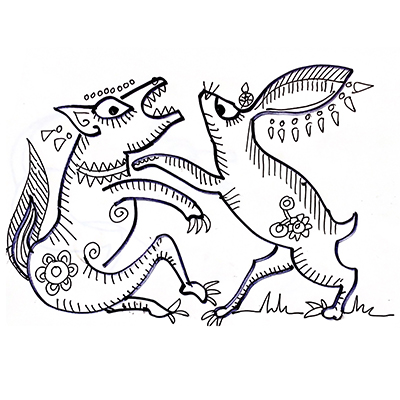 About 700 years ago, on the banks of Tungabhadra, in Karnataka, as per legend, two brothers known as Harihara and Bukka, saw hares turning around and attacking hunting hounds. They realised that land was special – a place of resistance. So they decided to build a city there, known as Vijayanagara that would resist the southern march of ‘Turuku Dharma’ that had overwhelmed much of North India. They were, as per later legends, inspired by Vidyaranya of Sringeri, head of a Hindu monastic order, that had been established by Adi Shankara, who 1300 years ago, again as per legend, had foreseen the arrival of forces that would threaten ‘Hindu Dharma’.

If you travel to Hampi today, you will find the ruins of Vijayanagara. It thrived for 200 years between the fourteenth and the sixteenth centuries. Around the city, we find large rocks everywhere. These are said to be the rocks used by the vanara sena to build Ram-setu further south across the sea to Ravana’s Lanka. There are mountains here connected with the legendary Kishkinda, home to Hanuman, Sugriva and Vali. As per historians, this identification of landscape with Ramayana began only after Ramayana was composed in the Tamil language about 1000 years ago. It was reaffirmed by the Vijayanagara kings who wanted to establish Ram Rajya.

Vijayanagara Empire was probably known as Karnataka Rajya, sandwiched between the Deccan and the Tamil regions.This name must not be confused with the modern Karnataka State, used officially since 1973. The word Karnataka or Carnatic once referred to the entire Deccan region with black soil between the Sahyadri Mountains in the west and the Coromandel coast in the east, watered by the Krishna and Tungabhadra rivers and their many tributaries. The name is probably derived from ‘karu’ meaning black and ‘kara’ meaning elevated and ‘nadu’ meaning religion.

Karnataka state has three zones: the coastal regions which traded with Gulf regions, dominated by Kadamba kings; the upper dry flat lands that sloped east, watered by Bhima and Krishna rivers, which was home to Chalukyas, the earliest southern empire to introduce North Indian ideas; and the lower undulating and relatively difficult to control, region of Mysore, that was dominated by Gangas. The divide between the two zones is the Tungabhadra river. Ashoka’s empire was restricted to the northern side of the river. Over 2000 years ago, Ashokan edicts and Buddhist shrines were established in the northern side while Jain sites rose in the southern side. The Rashtrakutas and later the Hoysalas would control both sides of the river. But even when the Delhi Sultanate extended control over Deccan, it had direct control only on the northern side. And in the times of Vijayanagara, 500 years ago, the northern part was controlled by Deccani Sultans of Bidar, Berar, and Bijapur, who had broken away from the Bahmani Sultanate, which in turn broke away from the Delhi Sultanate. In other words, the northern and southern parts of modern Karnataka had very different cultures, based on differences in geography and later, different rulers.

An old form of Kannada was probably spoken by many communities of the Deccan region around 500 CE. By about 1000 CE, more languages had emerged here, Marathi to the north in the region watered by Godavari, Telugu near the deltas of the Godavari and Krishna, Konkani on the western coast, Tulu and Malayalam further south. Initially the court language of the Vijayanagara empire was Kannada but then Telugu became the dominant language after Krishnadevararaya conquered the rich agricultural lands of the Telugu speaking regions by defeating the Gajapatis of Odisha. Even today, there are many arguments between Kannada and Telugu scholars about who should get credit for the Vijayanagar Empire. Sanskrit was spoken in this region only by the Brahmin elite and was more a formal language of gods, kings and scholars, not the language of governance.

Long before Vedic culture reached modern Karnataka state, there were Megalithic dolmens marking funeral sites of prehistoric people who were perhaps animal herders and miners. They probably supplied gold to the Harappan civilization 4000 years ago. As per legend, Chanakya’s student Chandragupta Maurya embraced Jainism in the final phase of his life and came from Pataliputra to the Mysore region of Karnataka during a great drought and ritually starved himself to death there, thus expressing extreme ascetic ideals. This happened 2300 years ago. His grandson, Ashoka, carved many edicts here, and built stupas, to promote Buddhism. In fact, the oldest image identified as Ashoka is found in Karnataka at Sannati stupa.

Nearly 1400 years ago, Chalukyas had stopped the southern march of Harsha and the eastward march of the Arabs. In the caves of Badami, Pattadakkal, and Aihole, the Chalukyas patronised the earliest images of Vishnu and Shiva, making Hinduism a powerful political force. Then about 1200 years ago, Chalukyas were replaced by the Rashtrakutas who pushed north seeking control over Kannauj, competing with Palas of the east and the Pratiharas of the west. This was the Age of Amoghavarsha, famous for his military, diplomatic and literary exploits, one of the most admired kings of the world – barely known in today’s Hindi-dominated society outside Karnataka.

A thousand years ago, in the time of the Gangas of southern Karnataka, the famous statue of Gomateshwara Bahubali was carved by Jains near Mysore at the spot where Chandragupta Maurya and his guru, Bhadrabahu had fasted long ago. Then after the fierce battles between the Cholas and the later Chalukyas, Ramanuja and then Madhva were promoting temple-based Vedanta in 11th and 13th centuries in South Karnataka, while in North Karnataka, in the Chalukyan lands, in 12th century, Basavanna was challenging the need for temples, and caste, choosing to worship Shiva as atma-linga placed in an amulet around their neck.

The Hoysalas, who came after the Gangas, sponsored the writing of the Jain Ramayana and Jain Mahabharata in Kannada language. They also raised intricately carved star-shaped temples of Halebidu and Belur in South Karnataka. Across the region local people were raising hero stones (vira-gal) in honour of warriors who died defending the village from wild animals, and marauders. On the three river islands of Kaveri, marking the boundary between Karnataka and Tamil cultural zones, temples were raised to Ranganatha, the sleeping Vishnu, as Jain influence waned and Hindu influence waxed. The Gopuram gateways we associate with South Indian temples today arose much later, in Vijaynagar times, clearly a display of power and defiance.

When Vijayangara finally rose, its patron deity in the early years was Shiva (Virupkasha) located in Karnataka side, but later the patron deity became Tirupati (standing Vishnu) located in Andhra side, indicating rivalry between Shiva worshippers and Vishnu worshippers, as well as the Kannadiga and Telugu factions of the court. The city of victory had visitors from Europe who remarked on its wealth and beauty, its many markets and temples. But the mega city was eventually destroyed by a confederacy of five Deccani Sultans in 1565, and the Hindu kings were forced to move further south. But memories thrived of the golden city of victory on the land where Ram himself found the support to rescue his wife, Sita.