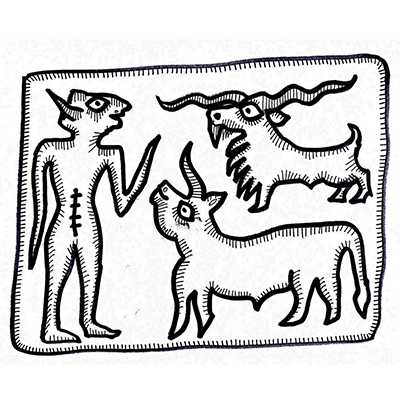 The image of a horned, White man storming the US Capitol building is now part of history. It reveals the fragility of democracy and the lure of megalomaniacs and conspiracy theories. But, why horns? Do they imply power? Or is it a fantasy of how barbarians should be?

The world of horned gods come to us from ancient tribal cultures that admired the horns of the mighty buffalo or bison, and the antlers of a stag. They were associated with the forest and fertility. We find this in Harappa. Not just the famous horned sage, surrounded by wild animals, who is often mistaken for Shiva (he is most certainly not), but also many horned creatures—horned tigers, horned elephants, horned humans. Between the horns is a branch of a tree with leaves, or maybe feathers. This headgear is still worn by tribal communities of central India such as the Maria, during ceremonies. We find such horned headgear in cave art of central India, indicating these were ancient Stone Age practices, to depict the power of the buffaloes and the bison who could fend off tigers.

In Europe, in Celtic material culture, we find images of the mysterious Cerunnos, horned and surrounded by wild animals, probably a shaman of ancient “barbaric” communities, who inspired the image of the Devil. Inspiration also came from horned wild satyrs who followed the Greek-god Pan.

The popular notion that Vikings had horned helmets is not historically proven. It has been traced to the use of special dramatic costumes used in operas based on the Nordic sagas of the 19th centuries. This perhaps inspired Hagar the Horrible. In Asterix comics, the Gauls are shown with feathers in their helmets, based on descriptions written by the Romans. We know that Samurai warriors wore horned headgear in battle to intimidate their enemies. The same was practised by Indo-Persian or Indo-Turk warriors. This could be an inspiration for the enemy having the horned form. It has nothing to do with being barbaric or less than human.

The earliest Indian image of a demon with horns is of Durga fighting the buffalo in Kushan art dated to 1st century CE. This buffalo gradually transforms into a demon with buffalo-head found in Mammalpuram in Tamil Nadu by the seventh century. This becomes the human with horns, found in popular depictions of Durga. No other asura is linked to horns. Not Andhaka, who is killed by Shiva, not Madhu or Kaitabha, Hiranakashipu or Hiranayaksha killed by Vishnu.

Today, horned demons are everywhere in mythological serials, where everyone who attacks Indra’s paradise is dark, fat, moustached and with horns. This reflects popular Bollywood prejudices. Now, even modern storytellers depict Ravana, the Vedic scholar, with horns, to make him seem more subhuman and barbaric, to elevate the divinity of Ram.