Honour as value: A concept for people without much economic or political power 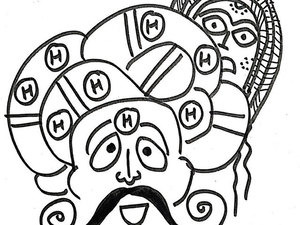 Value is an imaginary concept. A Hindu icon becomes a deity after the ritual of ‘prana-pratishtha’ which means ‘the breath placement’ ceremony. After this the icon is seen as being sentient, alive, capable of listening to the petition of the devotee and responding to it. A non-believer will never see value in the icon as a believer will. A believer will invest time, money and attention on the deity while the non-believer will simply keep the icon on a shelf, as decoration perhaps. The value of an icon depends on other things too – how old is it, how rare is it, how desired it is by other collectors. Many antique sellers in Mumbai have never understood the fascination of rich people with what they consider junk. But they indulge it for a premium price. What is being sold here? A thing, or the perception of a thing? That perception is brand.

In India, a great idea that has great political and social capital is the concept of honour, or pride, especially clan pride embodied in the moustache of a man. And it is usually located on the body of a woman. She embodies honour. She embodies pride. In Sanskrit literature there is the concept of ‘a-surya-sparsha’ or ‘one unseen by the sun’. Such a lady obviously belongs to a rich aristocratic household, who does not have to work in fields or go the village well. Such a lady is obviously ‘un-tanned’ and ‘delicate’. In male-dominated societies, such women were kept in ivory towers with chastity belts, or in inner courtyards with veils. The less people saw them, the fewer people touched them, the more valuable they became, and so greater symbols of honour. Goddesses almost. A goddess without power, of course, as she had to submit to the fierce male scrutiny and prove she was worthy of the status imposed upon her.

In a world that propagates ‘equality’, such valorisation of ‘honour’ and glamorisation of ‘female purity and chastity’ makes no sense. But it does makes sense to people who have nothing else in their life – neither economic nor political power – but honour. In such societies, battles are fought for a woman’s honour. She is trophy to be protected or booty to be claimed. Tribal kings expected these honourable women to die with them, thus carrying their honour to the afterlife. If the king died in battle, these women were to kill themselves, so no one could claim them, preferably in fire, so even their corpses would be out of reach.

Like ‘honour’, ‘holiness’ is also a currency. Icons become holy. Teachers become holy and so everything they touch become holy. Followers of gurus will pay vast sums of money to own a piece of clothing worn by the guru, or a cup used by the guru. Buddhist monasteries venerate relics of the Buddha – tooth and bone fragments found after his body was cremated.

In secular times, holiness is replaced by ‘glamour’. We want to own the clothes of a superstar, notes of a scientist, the guitar of a musician, even the divorce papers of a queen. In each case, the value is far more than the material worth of the object in question.

We would like to believe that the market is a rational place. That there is something called ‘fair’ value that a state or regulating authority can define. But when it comes to value, everything goes topsy-turvy. For fair for the believer is not just unfair, it is absurd for the non-believer.

Charles Darwin who wrote about evolution did not share the religious beliefs of his wife Emma. She did not agree with him either. But they both loved each other till the very end, despite valuing different things. The ability to respect other people’s value is the hallmark of civilisation. It is most distasteful to have other people’s values imposed upon us: and that holds true for the doctrine of ‘universal values’ that assumes everyone has to believe in the same thing.