Homophobia is subtle in Gurudom 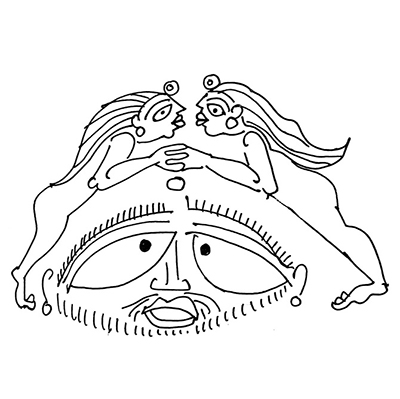 In the beginning, people said homosexuality is unnatural. Then scientists showed them that hundreds of species of animals do indulge in homosexuality. So people started saying homosexuality may be natural, but it is best restricted to animals. Amongst humans, it is a social disease. This unscientific understanding is popularised by many religious leaders, who are clueless about science, though they insist that the Vedas/Quran/Agama/Tripitaka/Talmud are essentially scientific.

A gay man heard how a broad-minded Indian guru presented sexuality as an integral part of spirituality, and so decided to read a bit more of the guru’s writings. He was suitably impressed, there was a lot of talk of how exploring sexual desires authentically enhances spiritual growth. But then came the horror! When the guru spoke of sexuality, he was referring only to heterosexuality and was essentially promoting orgies as a tool to liberate yourself. He saw homosexuality as a social disease resulting from heterosexuality being suppressed when men are locked with men in monasteries and prisons and women are locked with women in nunneries. This was his fantasy, which he marketed as mystical knowledge of the East!

A lesbian woman came upon a guru who gave her a sympathetic ear, and who confidently asserted that ancient mystical sages (all male, of course) had revealed to him that natural sexual activity is for making babies only, and that pleasure is just nature’s way of incentivising you to make more babies. It is the human perversion to bypass the baby-making and focus on pleasure. Such value placed on pleasure comes from stress, hormones, and a lack of spiritual grounding. He insisted that homosexuality is a social pathology, not a natural physiology. She could stay a single woman if she did not wish to be a man’s wife, but she had to engineer her life towards spirituality rather than sexuality if she sought fulfilment and happiness. Her libido, he insisted, was in dire need of fixing!

Most of these gurus do oppose the criminalising of homosexuality, and so appear to be modern. However, they do see homosexuality as a deviance (or its Sanskrit equivalent), or a ‘fluidity’ that needs explanation, management and re-alignment. They mirror the homophobia directed at queer people (pandakas, napunsakas) that we find in ancient monastic orders such as Buddhism and Jainism. Their discomfort with queerness is similar to their well-disguised discomfort with gender equality: ‘Women are as good as men, provided they put the man’s needs first.’ Essentially, these gurus preach qualified equality, where their personal comfort zone (heterosexuality, celibacy, masculinity) remains privileged.

It is important to recognise gurus as political figures. They are today clearly political vote banks, with a vast number of followers who do whatever the guru tells them to do. Hence the power of their spiritual discourses to influence social and political direction needs to be acknowledged.

We must also recognise the power of followers over gurus. Gurus are expected to be superhuman, and ‘pure and pious’. We don’t mind them dancing to Bollywood songs or playing golf. But if they were to talk too much in favour of sex and pleasure, we will see them as less than spiritual. In our hearts, many of us are convinced spirituality is an adversary of sexuality. We see Shiva who burnt Kama to ash. We refuse to see Shiva who was enchanted by Kamakshi and Mohini.