Holi for Shiva, Holi for Vishnu 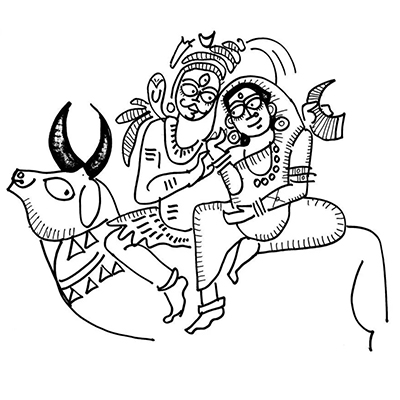 Why do we celebrate Holi? The standard answers we get in websites link Holi to Vishnu—he who preserves the world as per Hindu mythology. As the half-lion avatar Narasimha, Vishnu ensured the burning of the demoness Holika who, having the power to save herself from fire, sought to misuse her power, burning Prahalada, a devotee of Vishnu. Thus, the festival of Holi becomes one of the triumphs of Vishnu over those who oppose his worship.

Then, there is the popular motif of Krishna and Radha playing Holi with flowers, sitting on a swing, as spring gives way to summer. The water is to cool them down. Not just the heat of the weather, but also of passion and love. This festival later became popular in Mughal and Rajput courts. It was played in the women’s quarters with husbands playing with wives and courtesans while musicians made music. Coloured fragrant water made from flowers, and the consumption of cannabis (bhaang), made it a fun event.

But, why bhaang? Is that not linked to Shiva? Vishnu-worshippers will say it is linked to Krishna’s elder brother, Balarama, who also loved the intoxicant. It cooled him as he had a hot-temper. In many ways, Balarama is like Shiva. In fact, Balaram is identified as Shiva in the Puri temple of Odisha. Both are painted white in local art; Krishna is black. Radha is painted yellow and seen as the Goddess.

Holi was once the festival of Madan, also known as Kama-deva, the god of love. The festival started in Vasant Panchami, start of spring, and continued till Holi, end of spring. Women would gather in parks and sing and dance, and embrace trees. Their laughter and touch would cause trees to explode into flowers and attract bees and butterflies. That was the belief. For, they were all favourites of Kama-deva.

We have references to this festival in many Sanskrit plays. Women sat on the swing (dola), hence Dola Purnima, the full moon night of the swing, which eventually became Hola Purnima and then Holi. This festival is celebrated by Caribbean Hindus, who migrated out of India in 19th century as Phagwah, referring to the month of Phalgun.

The Buddhists were not fond of Kama. They saw him as Mara, demon of desire, whose defeat resulted in the triumph of Siddhartha Gautama and his transformation into the Buddha. But, opposing this festival was problematic as people loved this festival. Even today, many Buddhist activists see this festival as casteist. In Thailand, we see that Buddhists participate in a Holi-like festival called Sonkran, where water is poured. A similar festival is celebrated in Myanmar. But this was celebrated a month later at the height of summer. No colour, only water.

The festival occurs a fortnight after Shivaratri, the night of Shiva’s marriage. And this makes sense as Shiva is called Kamantaka, the destroyer of Kama, which causes winter misery. Plants shrivel and die. But then he marries Parvati and becomes Kameshwara, the lord of love, who even composes the Kama-sutra and passes it on to sages. And so, a fortnight later, Kama-deva is resurrected with the laughter of women and with colour. Love returns, in Holi. Destroyed the night before by fire, and restored the next day with water.