History of Bharat in Seven Days 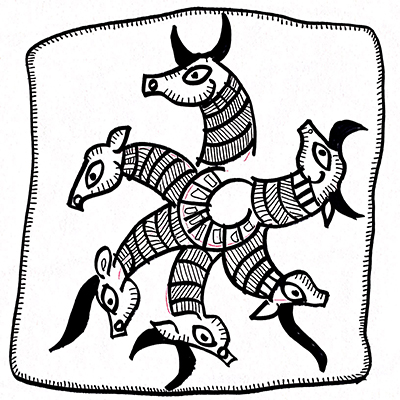 When you compress India’s history to one week, we gain a rather delightful perspective of our past. Indian history from Harappan times till today is approximately 5,000 years, so each day of the week is approximately a period of 700 years.

On Sunday, in Northwest India, farming appears. Well organised cities of the Harappan civilisation rise around the Indus river valley, as well as Gujarat coast, Rajasthan, and Haryana. These are part of the Bronze Age Trading Network. Sesame, chickens, beads, and cotton are exported to the Gulf. Seals with emojis and images of unicorns are used to regulate business. On Sunday, India did not know horses, because horses were domesticated only on Monday, north of the Caspian Sea.

Monday saw the gradual demise of Harappan cities. The Bronze Age network unravelled slowly around the world. The world was a mess. Only on Tuesday would the world see warriors on horse-drawn chariots, across the world in Egypt, Greece, Middle East, in China, even India.

On Tuesday, men on horses would come into Punjab from the Eurasian Steppes after spending a few generations in the Central Asian Oxus civilisation. They would marry local women, and their children would create the Sanskrit language, containing memories of Eurasia, Oxus, Indus and Harappa. They would call themselves Arya, like their fathers, and praise the gods in the sky. They would shift to Gangetic plains where the nomadic cattle herding life would give way to the more settled agricultural life, thanks to the fertile soil and the discovery of iron. In the South, we would find pot burials, raising of giant dolmen stones to the dead, and mounds of ash, created by cattle-herding communities, unconnected with the Northern Aryas.

By Wednesday, Vedic culture was thriving in the Gangetic plains. Merchants were trading, exporting elephants and cotton to Persia, and even using cash (karshapana). Urban culture with oligarchies saw princes like Buddha turning into monks and wondering about the point of wealth and luxury. Rebirth, debt, and liberation become popular themes. Adventures of Alexander the Great who destroys the Persian empire inspires imperial ambitions of Pataliputra. Buddhist and Jain monks and Brahmin priests started influencing the river valleys of the south: Narmada, Mahanadi, Godavari, Krishna, and Kaveri.

Thursday is when Satavahan kings from Nashik, who perform Vedic sacrifices, enable Jain and Buddhist merchants to take cotton from Andhra and export it to Rome via Sopara (Mumbai). In the North, foreign tribes like Greeks, Scythians, Parthians, Central Asia Kushans and Huns control the highways, support Buddhist monasteries and patronise Sanskrit. In the South, we hear passionate poems of lovers and warriors, and epic ballads of wives, courtesans, and nuns, in Tamil and Prakrit. A new form of Hinduism rises that tells stories of Vishnu, Shiva, and Durga.

Friday is when Southern temple-based kingdoms (raja-mandala) thrive: the Chalukyas of Deccan, the Rashtrakutas, the Cheras, the Cholas, the Hoyasalas, the Kakatiyas, the Palas and the Senas. Kannada, Marathi, Telugu, Odia, Bengali emerge as powerful local languages. This is the age of Adi Shankara, Ramanuja and Madhva. Brahmin culture has overpowered Buddhism and Jainism. Caste is now the norm.

Saturday is when we hear of the Delhi and Bahamani Sultanates, of Rajputs, the Gajapatis. the rise and fall of the Vijayanagara, Mughal and Maratha and even British Empires and the Freedom struggles. This is the age of Bhakti, Industrialisation and Democracy.