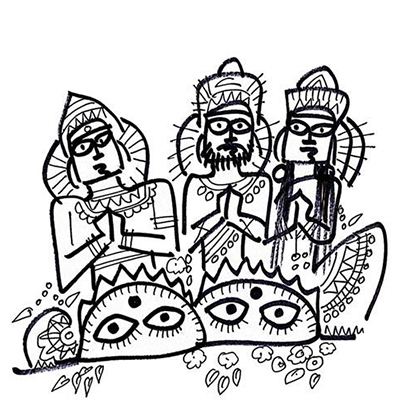 We often forget that there are still many Hindu temples in Pakistan, despite the state being avowedly Islamic, with clear blasphemy and anti-idolatry laws. These temples existed before Islam arrived in the subcontinent a 1,000 years ago. These shrines continue to thrive in Punjab, Sindh and Baluchistan, often with Muslim caretakers who follow secular practices that thrived before doctrine of religious exclusivity took shape in the colonial period. One example of such a temple is the temple of the goddess, Hinglaj Mata in Baluchistan.

Pilgrims from neighbouring regions visit this place. There are two stories associated with Hinglaj Mata. The first story deals with Parshuram. It says when Parshuram was killing all the kshatriyas, a group of them took shelter in Hinglaj Mata’s temple. She protected them, and Parshuram decided not to kill them. He taught them the Vedas and they agreed to give up their weapons. These kshatriyas later became weaver communities who spread across India. They are responsible for the great textiles that India became famous for, before the industrial revolution.

The second story is that of Ram. After defeating Ravan, Ram decided to do a pilgrimage to Hinglaj Mata. This was done in order to wash his sins of killing Ravan, who was a Brahmin. He went there with his royal entourage, but the goddess’s army of Bhairavas blocked Ram from entering. This was because he did not come as a common pilgrim. Ram left his soldiers and royal entourage and went ahead only with his wife, brother and Hanuman. It was a long and arduous journey and many times, there was no water. Lakshman tried to pierce the earth with his arrow, but no water would emerge. Hanuman stomped the earth with his feet, to crack it and release the water, but it didn’t. Finally, Sita touched the earth and requested Hinglaj Mata to release the water. That is how various ponds and wells emerged. This enabled them to make the long trek through the desert to Hinglaj Mata’s cave.

Ram marked his visit by carving images of the sun and the moon on the caves around the goddess’s shrine. The soldiers in Ram’s entourage who were unable to make the journey to Hinglaj Mata’s temple felt sad. They were promised that in future lives, they would return as pilgrims and the goddess would always bless them.

The shrine still exists in Pakistan and is respected by the local communities.