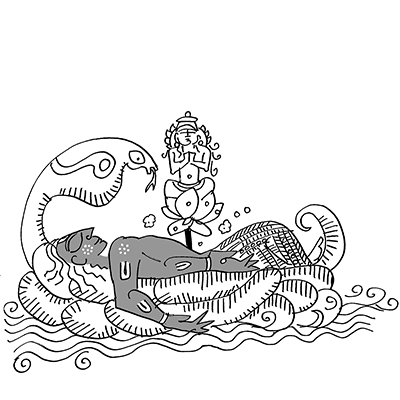 The sleeping image of Vishnu on the coils of a serpent on a lake is identified as Buddha Nilanakantha, thus merging Shaivism, Vaishnavism and Buddhism. Art by Devdutt Pattanaik

This reveals a unique form of Hinduism that perhaps thrived across India over a thousand years ago, when Buddhism and Hinduism were not separate, when Islam had no weight, and the emotionality and personalisation of god, as seen in the Bhakti tradition, had not become widespread.

Across Kathmandu one finds shrines of Ajati Ajima, or the self-born grandmother, or the primal mother goddess represented by a hole in the wall, indicating the womb that gave birth to the whole world. Great value is clearly placed on the goddess traditions. The most popular holiday is Dussehra. Young girls are seen as forms of the goddess, dressed so, and worshiped during the festival.

Important sections of Nepal have living goddess traditions, in which a virgin girl is worshipped and the king’s legitimacy is based on her blessings. This attribution of the virgin goddess to the kingship is also found across India, where every king is associated with a goddess. For example, Shivaji is associated with Tulja Bhavani, and the Vijayanagara kings are associated with Kanakadurga. Nepal’s most popular local goddess is Taleju, with whom we are told an ancient Nepalese king played the game of dice but then incurred her wrath when he looked upon her with eyes of desire. He appeased her with offerings of buffaloes and bulls, which embody that desire.

Shiva plays a very important role in the Pashupatinath temple. Kashmir Shaivism, which is Vedanta linked to Shiva, is supposed to form here, but the tantric form is far more popular, with Shiva being associated with Bhairav. And one finds a tantric form of Buddhism also. The sleeping image of Vishnu on the coils of a serpent on a lake is identified as Buddha Nilanakantha, thus merging Shaivism, Vaishnavism and Buddhism.

Tantric religion thrives in Nepal. This is evident in the love for red colour and the great comfort with blood sacrifice. Vajrayana Buddhism, which is sexual and violent, with images of Heruka and Vajrayogini, aligns itself more with the Shiv-Shakti tantric tradition of Hinduism. What is conspicuous by its absence is the Bhakti tradition associated with Ram and Krishna. Although there are temples dedicated to Ram and Krishna, the emotions associated with them are not intimate and personal, and hardly romantic.

In the last few centuries, Nepal has been dominated by the Gurkha, who worship Gorakhnath, a celibate Siddha Yogi. The story goes that he asked the local king for some milk. After drinking the milk, he spat it in the king’s hand. The king, in disgust, withdrew his hand and the milk fell on his feet. Gorakhnath told the king that the milk was to give him wisdom that would have made him the conqueror of all the senses, but, since the milk had been cast on to the ground, the king would but be a conqueror of land. The king thus became a great local king.

The Gorakhpanti traditions are centred around celibacy and the rejection of womanhood and the goddess. However, as the king conquered the Nepalese land, where the goddess plays an important role, he submitted to the power of the goddess, too. The oldest form of Hinduism revolves around the goddess, as the earth is associated with the goddess. A piece of the earth was controlled by a man, who was the king, or the Kshetra Narayan, and she was the goddess of the earth: the wife who gave the man children and food, in exchange for the protection he gave her. This relation between the earth and its protector is represented through the goddess and the king.

In the bhakti tradition, love plays an important role. The emotional connection of god, who is seen as a child, or a lover, is depicted in the Madhur-rasa and Shringar rasa. But in Nepal, the Veer rasa dominates, which is indicative of feudal and martial cultures.