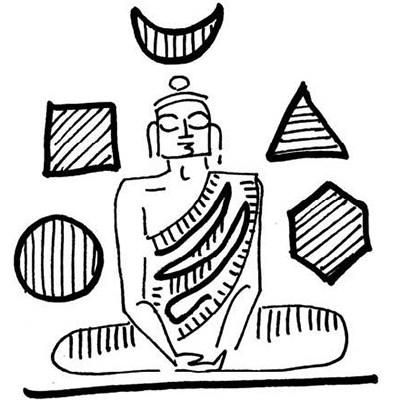 It was in the 19th Century that the wider world actually heard of the Buddha and Buddhism. Although Buddhism was practised for centuries in the Far East and Southeast Asia, people did not realise that the various images of the Buddha found in these countries belonged to the same person and that the person, originally, hailed from India.

These colonial scholars wondered why Buddhism was not popular in India, the land of the Buddha. They concluded it had to be because of the Brahmins, whose religion, from the polytheistic Vedas to the monotheistic Gita, made little sense to them, and whose hold on Indian kings and Indian society they had long learned to be wary of, and who were seen by influential Christian missionaries as the main obstacles to the path of conversion.

Despite huge evidence to the contrary (such as the breaking of Buddha idols and burning of Buddhist University of Nalanda by Muslim warlords), a narrative emerged that pitted Buddhism against Hinduism. Thus, Buddhism became a religion that propagated peace and favoured equality, hence was anticaste, while Hinduism became a religion of Brahmanical patriarchy that established the oppressive, ubiquitous caste system. Even today, when one travels around the world, the word “Buddha” evokes the emotion of peace, tranquillity and wisdom, while any mention of Hinduism evokes the notion of caste and misogyny.

Not just colonial propaganda, even academic papers have reinforced these ideas. Only now are scholars realising things are not so simple. While the older form of Buddhism based on meditation, Theravada, spread to Southeast Asia and the later form of Buddhism based on worship, Mahayana, spread to China, Buddhism’s decline in India, over hundreds of years, before the final Islamic onslaught, had more to do with a gradual absence of patrons. As regional kingdoms emerged, kings were increasingly drawn to Brahmin legitimisation of their kingship over the legitimisation by Buddhist monks. For a Buddhist king was protector of Buddha’s dhamma, while a Hindu king was the source of dharma itself, Vishnu on Earth, whose palace was not separate from the temple. Also, Buddhism valued the hermit over the householder, shunned entertaining art forms such as song and dance, saw all gods as serving the Buddha, while the Brahmanical way adapted Vedic thought to the ground realities: gods valued the household, gods loved to sing and dance and enjoy life, and village gods were diminutive forms of the cosmic divine. Even the Buddha was seen as a form of Vishnu.

That Buddhism favours the hermit over the householder, while Hinduism seeks to merge the hermit and the householder is evident in its mythology. Buddhacharita tells the story of a man who walks out on marriage and kingdom to become a sage, while the Shiva Purana talks about the great sage, on top of a mountain, who is coaxed to get married and have children. Buddhism frowned on laughter and saw laughter as the quality of women, children and animals – not suitable for a sage. By contrast in Hinduism, the goddess Durga laughs out loud when she runs into the battlefield to kill Mahishasura. Buddhist monasteries frowned at sexuality, while Hindu temples covered themselves with images of sexual freedom from the Kamashastra. Mahayana Buddhism speaks of the goddess Tara, but she is always shown smaller than the Buddha; in Hinduism the Goddess is, depending on context, smaller, equal or even bigger than Shiva or Vishnu.

People often point to Therigatha, the book of poetry written by Buddhist nuns, as an indicator of female emancipation in the Buddhist world. Few point to the extremely misogynistic writings found in the Vinaya Pitaka, the book of monastic discipline, where women are considered as evil creatures, temptresses, which is why there are more rules for nuns than for monks. Homosexuals were seen as not fit to be ordained as monks. In Jatakas, the Buddha-to-be takes forms of animals and plants and men, but never women; by contrast Vishnu becomes Mohini and Shiva becomes Ardhanarishwara.

All these misogynistic monastic principles of Buddhism eventually became part of the Hindu fold, when Hindu monasticism became mainstream, about a thousand years ago. We can argue forever if this historical process was cultural assimilation or cultural appropriation or cultural dilution. But the point remains that when one speaks of violence and misogyny and oppression in India today, even if they insist that India is not just Hindu, scholars tend to seek examples only from Ramayana and Mahabharata, and never from the Buddhist heritage. And that is problematic.