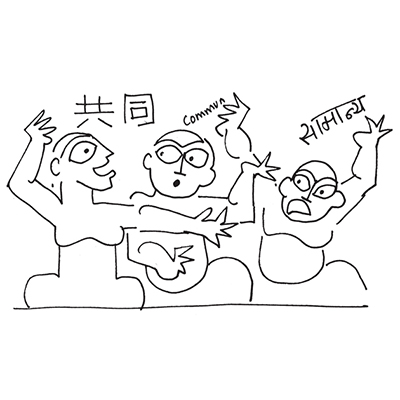 Business is about efficiency. There is always a great push towards standardised manufacturing and business practices, and a yearning for homogenous markets. However, the reality is that the world is diverse—and so you have to continuously modify and adapt manufacturing, sales and marketing practices to meet the diverse market conditions you encounter in the world. In other words, diversity makes our lives inefficient. This is one idea that no one in the business world wants to admit.

Take a look at the US dollar bill. The United States of America is built on the shoulders of immigrants—Germans, French, British, Russians, Irish, Chinese, Arab, Indian, African, Spanish. Yet the bill has only one language, like the Declaration of American Independence. English.

Now take a look at the Indian rupee note. See the number of scripts there. It acknowledges a fraction of the many languages spoken in the country. And now you wonder what should be the language of business, of the constitution, of the judicial process, of state business, of street business. In what language should the road signs be to help ALL Indians? Hindi—that’s no more than 40% of the population. English—that’s no more than 20% of the population. Sanskrit—come on!

Can we say that India’s diversity is the reason why it seems ‘chaotic’?

In China, there are many languages. But they are referred to as dialects. But there is a standard script—the central pillar of Chinese civilisation. The same script is read differently in different dialects. However, they all have the same meaning. This allows for a cultural unity in China, despite its vast size. It is through the single dominant script that Chinese people speaking different dialects feel united.

When the nation of France came into being over two centuries ago, the language was standardised. And this meant the destruction of local dialects and the creation of a ‘standardised’ French, with other dialects being seen as inferior or corrupt. This helped in the transformation of a kingdom into a nation-state. So much for liberty and equality of the 18th century revolution!

In Africa, diversity of tribes is not encouraged as it is seen as a threat to the unity of the nation-state. In Rwanda, after the 1994 genocide, the government plays down tribal identity and the consequent inter-tribal rivalry and insists that people refer to themselves as citizens of the state rather than members of the Hutu or the Tutsi.

The doctrine of equality, like the doctrine of unity, has problems with diversity. It tends to see diversity as divisive. In fact, many western political commentators keep wondering why there has not been a Balkanisation of India as yet? Why did it stop simply with the breakup of India and Pakistan? Surely South Asia with its vast diversity will drift towards division.

European Union has been struggling to unite. But unity demanded equality between the various European nations, at least in financial terms, for the union was economic not cultural. The assumption was that Europeans are ‘rational’ enough to have cultural diversity with economic unity. However, economic unity demanded economic homogeneity, which demanded behavioural homogeneity, that was naturally at odds with cultural diversity. The aim of EU was to enable capital and labour to move effortlessly between borders. But it was tougher than imagined. The Greeks did not quite have Scandinavian efficiency. And the French did not like Germans telling them what to do. People forgot the bloody Thirty Years war fought on European soil in 17th century over religious differences. And this was not a fight with Islam. This was a fight within Christianity, between Catholics and Protestants. It marked the fragmentation of the Holy Roman Empire into nation-states. What was once united by religion had divided itself on cultural grounds.

Equality is a Judeo-Christian-Islamic concepts rooted in tribalism. One God of the tribe treats all tribal members as equal. Diversity, on the other hand, is a concept rooted in polytheism, the comfort with many gods. Equality and diversity will always be at odds with each other just as monotheism and polytheism have always been at odds with each other. In the 19th century colonial powers privileged monotheism by calling it religion while qualifying polytheism as pagan and mythological.

However, in the 21st century, post the World Wars, as atheism and postmodern philosophies are on the rise, we are becoming blind to the tension between the equality of monotheism and the diversity of polytheism. Both are values that we admire, and that makes us forget that diversity has a cost, that is very different from the cost of equality.