He who rides Rats 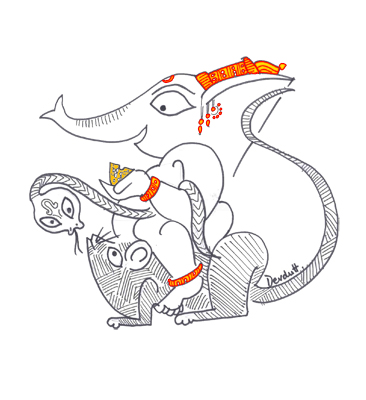 Published in Times of India on Ganesh Chaturthi, 7th September 2005.

Imagine walking into your house and finding a rat scurrying across your sofa. Or imagine opening your kitchen cabinet and a rat leaping right at you. Sharp teeth, red eyes. A painful bite. Open your desk and there are the gnawed remains of your text book. And the excrement of rats. Go to the toilet, smell that rotting flesh, a dead rat somewhere. See that open sewer next to your house – what do you see there? Rats, for sure. Dozens of rats. Rats everywhere. Imagine them under your bed, in your attic, behind the sofa, in your toilet, in your pantry, your storehouse, your basement…

Rats evoke feeling of disgust. There is something inherently dark, and unclean, and sinister about them. Think rats and you think garbage, gutter, plague, disease. Rats means destruction of property. Pilferage. Filth. There is nothing adorable or desirable about a rat. So why is Ganesha always associated with a rat, lovingly called Mooshika?

But it is not a rat, you are corrected. It is a mouse. Rats are nasty. Mice are much gentler. Cute Ganesha rides a cute mouse, my nephew insists. The fact is nobody is sure what Mooshika is exactly. Scholars and the general public can argue about it endlessly referring to obscure Sanskrit texts: Rat. Mouse. Maybe even a bandicoot. Whatever! basically a rodent, a pest, the bane of the storehouse, enemy of the farmer, a denizen of the sewer. Rats are inauspicious. You definitely don’t want them in your house.

Ganesha is Mangala-Murti, the embodiment of auspiciousness. Why then does he have as his mount something so inauspicious as a rat? What is the message there?

For Hindus, God is the container of all ideas. Every god or goddess (spelt in lower case) symbolically represents a particular idea. All Hindu gods and goddesses – if they can ever be enumerated – represent all the ideas contained in God. Shiva, for example, represents renunciation. Vishnu represents worldliness. Kama represents love and lust. Yama death. Kali is wild nature. Gauri is domesticated nature. Lakshmi is wealth. Saraswati knowledge. Ganesha represents prosperity and power. Hence he is fat (prosperous) and has the head of an elephant (powerful).

But prosperity and power are meaningless if life is plagued with problems. And what better way to represent problems than as a rat/mouse/bandicoot. Mooshika represents that issue which makes our life miserable. That problem which though small eludes resolution and continues to exasperate us, irritate us, outwit us at every turn. It is that bill that will never be cleared by the boss. It is that pimple which will never go away. It is that neighbor who always keeps his garbage right in front of your door. It is that dripping water tap that no plumber can fix. That set of car keys which you cannot find just when you have to leave the house. It is that case in court which is not moving for years. These are the rats in our lives, the insatiable thieves who are gnawing into our sense of well being.

Imagine someone who gets rid of all those irritating rat-like problems of your life. That someone, for Hindus, is Ganesha. Around Ganesha’s giant belly is a serpent – that friend of the farmer – who eats the rats, controls pilferage and thus protects the harvest. With the grace of Ganesha, problems disappear and prosperity and power appear. You can imagine Ganesha catching hold of a problem (rat/mouse/bandicoot) by its tail, dragging it away, sitting on it, so that it troubles you no more. No wonder Ganesha is such a popular god. Remover of the rats that plague our existence. Remover of obstacles, remover of hurdles. Vighna-harta.

Rats are also symbols of fertility. They breed like crazy. Ganesha is always associated with fertility symbols. The Dhurva grass for example, which keeps growing even when uprooted. If Dhurva is the plant-symbol of fertility, rat is the animal-symbol of fertility. Even in China and Japan, rats are associated with fertility, children, prosperity. Rats are also unstoppable, relentless, breaking through any obstacle to get to the grain. Simultaneously, rats are symbols of avarice and greed. They are relentless hoarders. Thus, rats have a positive aspect (fertility/unstoppability) and a negative aspect (pilferage/plague). With Ganesha sitting on top of Mooshika only the positive aspects reach devotees while the negative aspects stay away.

Ganesha’s image may evoke a sense of prosperity and power and auspiciousness for which fertility is important but his Mooshika reminds us not to be complacent: the rat may be fertile and unstoppable – a contributor to our wealth – but it is also capable silently and secretly gnawing into our ethics, our morals, our values, the very foundation of our apparently fulfilled lives.