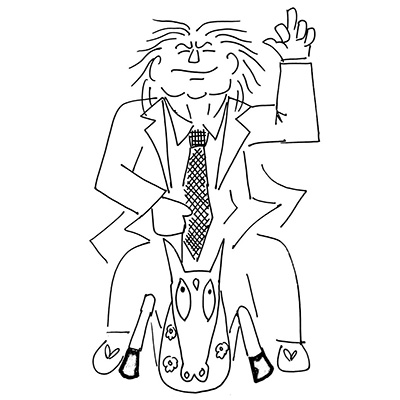 Donald Trump fits the idea of what Vishnu’s last avatar epitomises – an invasive, violent, disruptive force that redefines old ideas. I have always maintained that the horse-riding Kalki, the final avatar of Vishnu, is not a saviour who brings back old ideas, but rather an invader, whose violent disruption forces old ideas to redefine, reframe and rejuvenate themselves. For the idea of Kalki emerged with the arrival of Greek, Huns, Muslims and European warlords who forced Hinduism and Indic civilisation to restructure itself.

To me, Trump fits this understanding of Kalki. Such qualifications may be alarming, especially to those who wish to dehumanise Trump because of his foul language. I even risk being branded Right Wing Hindu radical with such a suggestion. But, hey, isn’t God inside everyone? Trump is no saviour of the Republican Party, or America; he is the one who is going to change Western discourse forever.

In the years following the Second World War, and especially after the Cold War, the West saw itself as the leader of the global village, champion of equality, justice and democracy. Then Brexit happened: many people in Britain realised that joining Europe meant losing British identity, and superiority.

The desire to be superior is embedded in individuals, and communities. We want to be alpha, and those who cannot do it individually, do so by joining a pack or a herd or a hive. We see this in Russia, too. Shirtless, homophobic Putin is a classic pack leader: when he stood up to Europe and America, he earned the love of his people, who felt a global loss of prestige following the fall of the Soviet Union.

It is not so much about justice as it is about power. If the justice discourse meant disrupting old hegemonies through regulation, then this is clearly a global pushback. A commentator noted how Trump gives voice to the marginalised in America: the rural folk who feel overwhelmed by city politics and undermined by arrogant intellectuals who mock Jesus, and proclaim the superiority of their rational and atheist discourse, who use political correctness to stifle freedom of speech. Putin, and now Trump, speak the language of patriarchy, to the horror of the liberal who assumed his or her views were moral and ethical, and so right, and so beyond challenge. They who had cleansed all universities of opposing ‘un-enlightened’ points of view, and had reduced education to indoctrination, are now facing the wrath of the rejected.

Whether Trump wins or not, his rise has stripped the West of all its moral snobbery, their strategic use of social justice frameworks to put other countries and cultures on the defensive. Now with Europe and America shutting its doors to immigrants, the essential Brahminism of ‘developed’ nations cannot be ignored. And, the spotlight on men who abuse women has expanded from India’s alleged rape culture to the American presidential candidates and their normative ‘locker room’ talk.

This is what Kalki does. He saves, or rather enlightens, by causing rupture. We have seen what is revealed in the tear, discovered how liberals and intellectuals have reduced democracy to a tool meant to domesticate the other, and homogenise culture, through regulation. In their primal essence, the extreme Left and the extreme Right, the activist and the politician, are very similar: yearning to dominate and control the opponent. Wisdom lies not in winning in argument, but in understanding and outgrowing the desire to win.