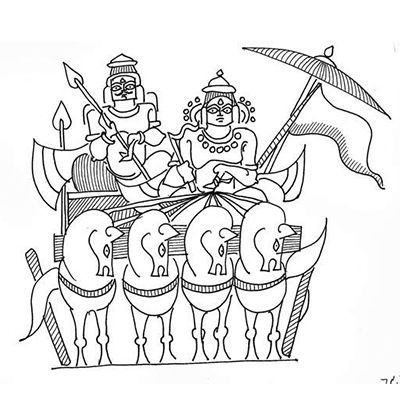 DNA studies are now showing that Harappans did not have genes of steppe pastoralists (Aryans). But these Aryan genes are found in about 30 per cent of the Indian population. This means the Aryans came after Harappan cities had collapsed. They did not invade Harappa, but many Aryan men, who came in waves, over centuries, certainly did migrate and marry Harappan women. More accurately, Aryan men married women whose ancestors built Harappan cities, and who followed Harappan customs.

Harappans and Aryans were different. Harappans buried the dead. Aryans cremated the dead. Harappans did not use horse-drawn spoked-wheel war chariots; they had not been invented when these cities thrived. These horse-drawn spoked-wheel chariots were invented in Central Asia, less than 4,000 years ago, and used in war only 3,500 years ago, long after Harappan cities had ceased to exist. This chariot came into India with Aryans, who also brought a new language, that later evolved into Sanskrit. Of all Aryan languages, only in India do we find the retroflex sound (dh- of dharma) indicating that the Vedic language, despite foreign roots, evolved a great deal locally as it was mouthed by children who had Harappan mothers and Aryan fathers.

Based on this understanding, when we read the Rig Veda, we realise the hymns contain memories of migrant Aryans, local Harappans and their children who moved gradually to the Gangetic plains. From Aryan memory comes the chariot-riding god Indra, who defeated demons like Vritra, Vala, Dasa, Dasyu, Pani and Sambara, and brought light and cows. Indra is closely associated with Varuna-Mitra, who is less violent and more conciliatory and ethical. Together they make up the attributes of kingship. In Iran, which also had an Aryan population, we find a scripture called Avesta where Indra and the devas are seen as the demons and Varuna-like Ahura Mazda is the force of good. This clearly reveals rival Aryan tribes settled in Iran and in India. Both Avesta and Rig Veda, speak of fire, the ritual of yagna (yasna in Iran) and a stimulant called Soma (Hoama in Iran) which has now been identified as an Ephedra-containing leafless shrub found in the mountains of Central Asia. Iranian Aryans refused to cremate the dead as they felt fire was too pure to be contaminated. They chose to let the body be exposed to elements (not buried as in Harappa). Indian Aryans preferred cremation to purify the dead and release the soul.

Veda contains hymns describing Harappan burial but more hymns on Aryan cremation. The Vedas speak of a mighty river called Saraswati, which eventually dries up. Was this an Afghan river of Aryans or the river on whose banks the Harappan cities were built? Scholars are not sure. Reference to Pleiades (Krittika) in the east and the Big Dipper (Sapta Rishi) constellation in the north seems more aligned to Harappan astronomy. In Harappa, we don’t find seals with images of chariot-riding herdsmen. Instead, we find images of goddesses in trees (Vedic Aranyani?) and hermits (Vedic Rudra?) seated amongst wild animals.

The mythology of the Rigveda transforms, dramatically, in Brahmana literature, and later, in Upanishad literature, where it becomes almost unrecognisable, before it telescopes into Puranic literature where we learn of Vishnu and Shiva and Devi in great detail. This was a later creation. A product of greater Harappan and Aryan synthesis and perhaps a newer imagination.