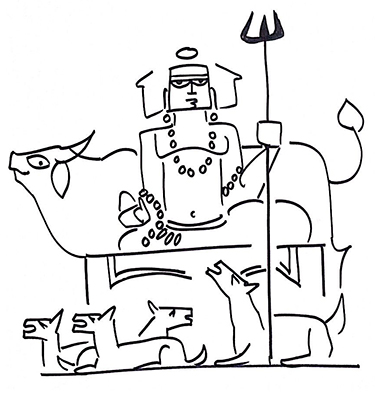 So yet another book appears in the market speaking of dark secrets of a guru’s ashram. A cathartic confession of sex, politics, corruption and violence! The response will be predictable.

The guru’s followers will ignore it completely. Or will attack the writer with viciousness, and accuse the writer of fraud, blackmail and wrongdoing. Conspiracy against our culture, they will scream. The law will stay dormant unless it makes political sense to oppose the guru. Television shows may discuss who is a ‘real’ guru and who is a ‘false’ guru. It has happened before; it will happen again. Whatever happens gurudoms and other cults will continue to thrive in India and elsewhere as they always have.

The idea of a guru is an ancient one in India. Traditionally, the first guru was called Adi-nath, the primal master. Often identified as Datta, son of Atri and Anasuya, he was considered the manifestation of Brahma, Vishnu and Shiva. Many modern gurus trace their lineage to him.

Datta himself had no guru. When asked who his teachers were he pointed to the elements, to plants and animals, to humans in various vocations and said, “These are all my teachers. Everyone teaches me something.” Anything or anyone who provokes insight is thus a guru. Of course, followers do not like this idea. It puts the burden of learning upon them. They would rather be passive recipients of pre-digested wisdom of their gurus. They stop thinking and let the guru tell them what to think and what to do. They submit completely to the guru’s whims. They call it devotion.

The Puranas say that Datta was once seen with a cup of wine in one hand and a woman on his lap. When questioned about his association with ‘impure things’, he just smiled. We can take this story as indicative of a symbolic mystery. Or we can assume that normal notions of morality do not apply to gurus. More often than not, followers of gurus take the latter explanation to cope with the inappropriate and excessive, even exploitative behaviour, of their spiritual leaders. They call it surrender.

Datta is visualised walking with dogs in front of him and a cow behind him. Dogs embody insecurity and neediness, who are highly protective of the master and the master’s territory. They keep turning around to check if the master is with them. By nature, they are dependent creatures. The cow, by contrast, is the symbol of complete autonomy. She offers milk as nourishment but does not seek a master, even though she does have homing instinct. This image is symbolic of what the guru is supposed to be — transforming followers from needy attention-seeking dependent dogs to independent yet dependable cows. More often than not, the followers of gurus stay dependent on gurus. They call it loyalty.

The irony is gurus themselves become dependent on the adoration of the followers, unable to let them go. They become victim of the power showered upon them. They feel entrapped in their role and finds solace by exploiting their prisoners, their followers, who in turn find validation, like an abused spouse, by letting themselves get exploited. They call it love.