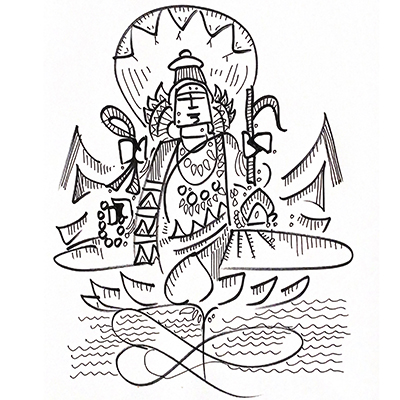 Jainism is a monastic order. Historically, it emerged 2,500 years ago, with most scriptures written 1,500 years ago. However, as per mythology, Jainism is an eternal religion (sanatan dharma), with 24 Tirthankaras appearing on earth in each of the infinite cycles of time, along with 12 Chakravarthys and 9 Vasudevas, to transmit the message of Jainism. What is often overlooked in conversations about Jainism is the idea of the Yakshas and Yakshis. The female Yakshi is also known as Yakshini. These are male and female attendants linked to each Tirthankara. There are 24 Tirthankaras and each one is associated with a male and female Yakshi. In other words, there are 24 Yakshas and 24 Yakshis in the wider Jain pantheon.

The Jain world was divided into two groups of people, the Shramanas and Shravakas. The Shramanas were the monks who strove to outgrow hunger. They saw their role model in the Tirthankaras who had abandoned everything in this world, including hunger. The Shravakas took care of the monks. These were ordinary businessmen, traders, and they had basic, worldly needs. While they venerated the Tirthankara, they also worshipped local gods and goddesses. These local gods and goddesses were associated with mountains, trees, rocks, rivers. Eventually they became the Yakshas and Yakshis who were linked to the Tirthankara. Thus, the folk religion of the common man became linked with the esoteric faith of the Jain monastic order.

Some Jain Yakshis are very like Hindu goddesses. For example, the Yakshini of Neminath, Ambika rides a lion like Durga. She is associated with children and so can be linked to Parvati. The Yakshini of Parshwanath known as Padmavathi is linked to serpents and to the lotus flower and may be linked to Lakshmi and to earth goddesses like Satavai and Brahmani popular in Goa. Rishabhnath is linked to Chakreshwari the goddess who holds the discus like Krishna.

Saraswathi, goddess of knowledge, is a major part of the Jain iconography as she embodies the wisdom of the sages. Probably emerging as a Yakshi, the oldest image of the goddess is found at a Jain archaeology site in Mathura dated to 100 CE. In the more austere Digambar tradition, she is associated with the peacock. In the Shwetambar tradition, she is associated with the swan. She is linked to music, arts, writing, scripts. Also known as Shruti-devi (goddess of speech), her iconography, probably, was more popular in the Jain pantheon, before she became a major deity in the Hindu pantheon.

Another Yakshini who gained popularity, especially in South India is Jwalamalini, whose necklace is made of flames. She was popular in the Rashtrakuta era, between 750 AD and 1,000 AD in Karnataka. She is associated with Tirthankara Chandraprabha.

These Goddesses are invoked for prosperity and security. They are often multi-armed. It is through them we see the rising importance of female goddesses, not just in the Jain pantheon, but also in the emerging Mahayana Buddhist and Puranic Hindu pantheons.