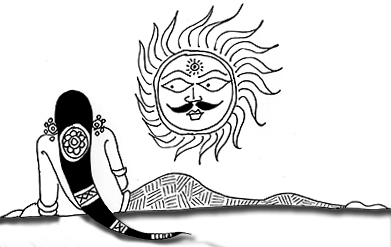 I was friends with a colleague who worked at the same level as myself. Last year, I was promoted and in the new scheme of things he had to report to me. From that day itself I started witnessing a change in his behaviour towards me and now things have come to such levels that he is more of a sworn enemy. I got the job because I deserved it and on back of solid performance but I lost a friend, and more over, I don’t understand the hostility. No matter how much I try and talk to him nothing changes. What do I do? I don’t like to give up on people.

This little detail from the Mahabharat is rarely told in modern retellings. When Pandu learned that his blind brother Dhritarashtra’s wife, Gandhari, was pregnant, he wept as he could not make his own two wives pregnant. Then he learned how his first wife Kunti could bear children by calling upon the gods. On his behest, Kunti called three gods and had three sons by them. Pandu then requested her to share her power with his second wife, Madri, so that even she could also bear children. When this was done, Madri invoked twin gods and had two sons with just a single invocation. “Give the power again,” Pandu told Kunti but Kunti refused. What if Madri cleverly invoked another set of twin gods, or maybe triplet gods, and ended up having more sons, then she would give Pandu more children, besides being the more favored wife. Kunti would not allow that. When news reached Gandhari that while she was pregnant, Pandu had become a father, she got so upset that she beat her belly with an iron bar to force out the child. This is what jealousy does to us. Though we all pretend to be noble.

At the core of the problem is the issue of power. As long as you and your friend were in the same level, the organization saw you both equally. As soon as you were elevated, the organization valued you more. This made your friend feel less powerful. He resents it. The resentment is amplified, if in his own evaluation he is as good or better than you. The organization then, in his view, is the parent that has preferred you over him. He feels like the abandoned wronged child. In his eyes, you are the villain, the favored child, one who picked up by the parent, while he is forgotten and rejected. This manifests in hostility.

You may feel you deserve your promotion. But your friend/colleague does not think so. In his worldview, he is right, and everyone else is wrong. Even if you deserve the promotion, he wonders why he is not as favored as you. And this adds to his sense of rejection.

Every action in life has a consequence. Your ‘good deeds’ have earned you a promotion and cost you a relationship. You can reason with your friend but he may not want to reason with you. If he agrees to your rationality, you will become even more powerful, that only fuels his resentment. So he will reject you and try to dominate you by being hostile to you (he seems to be winning this battle).

You need to perhaps focus on the job and use professional parameters to ensure he does what he is supposed to do for the organization and the team. You need to perhaps approach him with a little bit more empathy rather than outrage. Allow him to be angry. He needs to grow up; otherwise he will end up a bitter frustrated man.