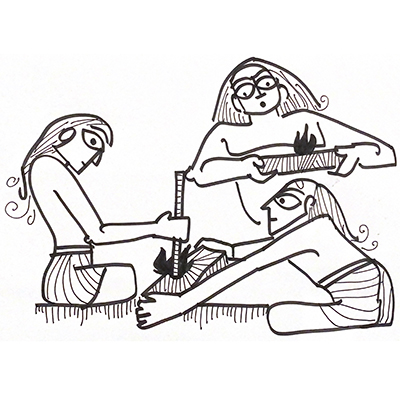 Of the thousand songs in the Rig Veda, we find 200 songs praising Agni. In fact, the first song of the Rigveda is a praise to Agni, who is called the priest and messenger of the gods. Agni must be placed in the eastern direction and it is through him that offerings reach the gods. Fire is clearly the most important element in a vedic ritual.

Fire was so essential in vedic times, that there were three special fires. There was the main fire which was placed in a circular altar linked to the household fire. Then there was a square-shaped altar placed in the east for the gods. Lastly, a hemispherical altar placed in the south for the ancestors.

The process of kindling fire was elaborate. It inspired poets to create many poetic metaphors. For example, there was a metaphor about the two sticks which were rubbed against each other to make fire. The Shami stick was drilled on the Ashwatha branch. This was compared with the male making love to the female to create fire. Another metaphor was calling the two palms rubbed together to drill fire as two mothers (dvi-mata).

Fire was also considered Apam Napat or the grandchild of water. This was because water produces wood and the sticks of wood would produce fire. When the spark was seen after the drilling ritual, the embers it produced were gently waved and transformed into flames. Blowing Fire is clearly the most important element in a vedic ritual. Blowing on the fire was avoided since it would contaminate fire with spit. Thus, the gentle cradling of fire was encouraged. This reminded people of grandparents taking care of their grandchildren. Hence, the name Apam Napat or the grandchild of water was given to Agni.

In later Vedic literature, we hear the story of how fire reveals the identity of Bhrigu’s wife Paloma to a demon. This enables him to find and kidnap her. She is pregnant at this time and the child in her womb slips out. The child who slips out, curses fire for revealing his mother’s whereabouts. It is this curse that makes fire consume all impure substances. Agni is later forgiven. He is told that whatever he consumes will be purified. In the Mahabharata, fire is said to have lost his lustre because of all the impurities he has consumed. To regain his lustre, he is encouraged to burn a forest and create new Aryan settlements for the Pandavas.

As temple culture evolved, fire became more an offering and a decorative item, than a deity. Lamps are lit at dawn and dusk and integral to the aarti ritual to see the gods in the presence of light. The deity is placed in dark, womb-like, cave-like temple annexes. And fire and its light were used to make the deity come alive. Thus, we see the transformation of fire from Vedic fire altars to temple lamps.