Going Around To Come Around 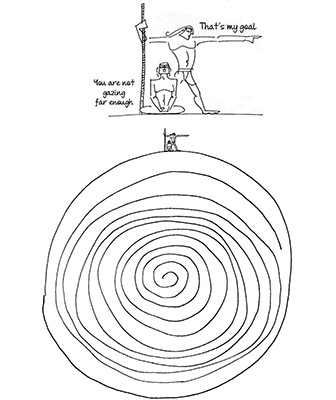 All his life, Buddha kept speaking about the impermanence of all things and the relationship of desire and sorrow. So it was ironical that after he died, his relics such as bone, tooth and hair, were placed under mounds of clay and cow dung, which were decorated with parasols and garlands of flowers and transformed into a stupa. People did not want him to go; they wanted the permanence of the Buddha, if not the person then at least the idea. They walked around this stupa in reverence. This act of circumambulation came to be known as the parikrama — going around the perimeter, the circumference of the stupa. This ritual movement of reverence gradually came to be explained metaphysically. For it mimicked the action of the cosmos: all things go around to come around. Everything is cyclical, like the seasons.

Shortly after Buddha, we have India’s greatest empire: the Mauryan Empire, with its greatest king, Ashoka, who reigned in the 3rd century BCE. Royal laws travel radially outwards from his capital city of Pataliputra in the Gangetic plains, north to Gandhara, modern Afghanistan, and south to Andhra Pradesh. The spread of his power is indicated by his edicts that were carved out in stone. He encouraged monks and nuns to travel to different parts of the world to spread the word of the Buddha. Travel takes a new form: not the search for a new home, not raids into other people’s lands, not the quest for trade, but the spread of ideas.

The idea of both empire and proselytization seem rather alien to the Indian way of thinking which has been more inward looking, and one wonders if these ideas were inspired by the actions of Alexander, the Great, who overthrew the great empire of the Persian emperors and shook up the world of his times, and came right up to the North Western borders of India. He wanted to change the world, unite the world with his ideas, inspired by Greek philosophers, hence he established many cities called Alexandrias along the way.

They say on the banks of the Indus he met a naked ascetic, who he called a gymnosophist. It probably was a Jain Digambar muni. Digambar means the sky-clad, a euphemism for naked. Finding him seated, at peace, on a rock, staring at the sky, Alexander asked him, “What are you doing?” The gymnosophist replied, “Experiencing nothingness. What about you?” Alexander declared, “I am conquering the world.” Both laughed. Alexander laughed because he thought the gymnosophist was a fool for not travelling, for not having ambition, for living a life without a destination. The gymnosophist laughed because there are no destinations in the world. Seated or moving, we are always travelling. And when we keep travelling, we end up returning to the place from where we started, hopefully a little wiser.