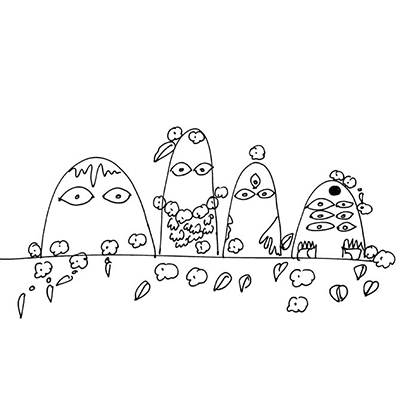 What did communities that were not allowed entry into temples do?
They decided to create their own gods.

There was a community of landless labourers in Gujarat. Some were also cattle herders, some sold forest produce. They were also extremely talented artists, but were denied entry into temples. Therefore, they decided to create their own gods by painting their images on cloth. This led to a whole new art form: a form of mobile temples on painted cloth. They worshipped their own goddesses, Hadkai Mata, who rides a dog and protects people from measles, or the goat-riding Meldi Mata, who protects farmlands. They are today called Devi Pujak Vaghri.

Across India, we see a very interesting pattern in Hinduism. On one side, we see temples that are controlled by priests, who grant access only to some people. The rationale behind this is that the deity within the temple needs to be maintained, in a particular way, for it to bestow power, which ensures the land around the temple remains peaceful, prosperous and fertile. In other words, the temple establishes mangalyam, that which brings prosperity to everyone. To maintain the idol’s power, the deity must be kept isolated and pure and only certain priests can enter the sanctum sanctorum. Certain communities can enter the temple and certain communities cannot. Certain communities are not allowed to enter the village itself and must stay outside.

Read from a right-wing perspective, this is just technology to ensure the prosperity of the village. Read from a left-wing perspective, this seems like a technology to establish a hierarchy and keep certain people away from village resources. In either case, denying access to the temple deity did not mean that the people beyond the temple did not have access to the divine. They had their own divine.

The idea that everyone needs to have access to a deity comes from monotheism and equality doctrine. But in polytheism, there are many gods, each for a different function. Some gods are wild and choose to not be located in enclosed spaces.

Some are domestic and rooted. Some appear at certain times only, like in the heat before rains or during floods. Some are linked to certain professions and so restricted to people who do not follow that profession. All gods have boundaries, just as properties have fences.

Each community located its identity in its own deity. Differences in deities and customs ensured diversity thrived, along with the side effect of hierarchy. Monotheism rejected the feminine and the queer but not polytheism. All these different forms were emanating from the same source, but while some forms had to be kept inside the temple, in ritual purity, there were others who could travel, transform, metamorphose, merge and mingle. A god, locked inside the temple, did come out regularly though to meet people in chariot festivals, or on palanquins at different festivals, around the year. This is how he engaged with the outside world.

But the community outside also had their own gods, which were either located under trees, or in houses. They even travel around: one kind of deity is carried on the heads of certain communities, in baskets, pots or specially painted boxes. These are the travelling gods of India. Another kind are those that are painted on cloth and this cloth not only depicts them; but also, stories of their valour.

So, you can have a god visiting your house, on the heads of their priests, as we see in the Renuka Yellamma tradition of Karnataka, or we see the painted gods in Rajasthan, in the Devnarayan and Pabuji Phad paintings. Or the Kavad story boxes carry stories of the gods on the heads of storytellers. Thus, gods are not restricted to temples. In Karnataka, the Lingayat community carries Shiva on their chest. We can see this as defiance of Brahmanical orthodoxy or simply an alternative expression of devotion. In the Kullu valley, gods with special masks travel in palanquins to meet each other once a year. In cities across India, we find temples of Sai Baba being taken around in bullock carts and cycle rickshaws.

Thus in Hinduism are different types of gods, for different communities and different purposes, some within enclosures, some outside enclosures, some fixed, some mobile – giving access to divinity to everyone in the community. Any attempt to homogenise these traditions, give them one meaning, is to deny Hinduism’s diversity.