Goddess of Economics: Money Has Value Only When It’s Circulated 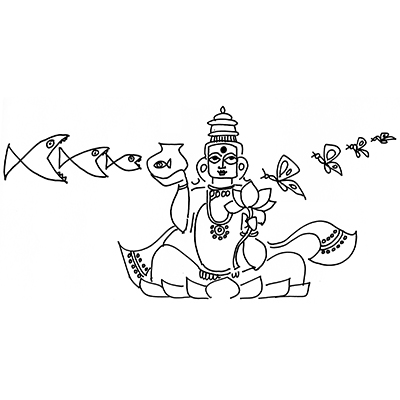 Buddhism is a religion where you are told that desire is the cause of suffering, where we hear of Buddha giving up his kingdom to become the great awakened one. Yet, at the stupa where he is remembered, we find some of the earliest images of the goddess of wealth, Lakshmi, Sri. Merchants and monks who venerated Buddha believed that desire is the cause of suffering; but they also respected Lakshmi, because they were pragmatic enough to know that without Lakshmi, life cannot function. Even Jains say that when Lakshmi appears in the dreams of women, they are destined to give birth to saints, heroes and kings.

The word ‘Lakshmi’ itself comes from the word ‘laksh’ which means target. Inanimate objects don’t have targets, but all living creatures have a target. All living creatures look for food to survive. So, their target is food. Food, their laksh, becomes their Lakshmi. For plants, Lakshmi is sunlight, water, nutrients. For herbivorous animals, Lakshmi is grass and leaves. For carnivorous animals, it is the flesh of other animals. So, basically, Lakshmi is that which sustains nature.

For humans, Lakshmi is not just food, it is also property. It is the clothes we wear, the house we live in, the products we consume. So, the more Lakshmi we have, the more comfortable our life becomes. That is the concept of Lakshmi. The ancient Vedic seers understood it long ago, which means the oldest song praising Lakshmi is called the Sri Sukta, which is found in the Rigveda. It is where you pray for Lakshmi to come into your life in the form of cows, horses, grain, gold and all kinds of services. We find Lakshmi being considered a goddess, not just of affluence and abundance, but also auspiciousness, in Buddhist and Jain literature.

Lakshmi is called ‘chanchala’. Chanchala means ‘one who is whimsical’, you don’t know in which direction she shall move. Nobody can predict the movement of Lakshmi, just as we cannot predict the movement of the stock market, the monsoon, if the next year’s harvest will be good, if a company will be profitable next year, if we will get a promotion or a bonus next year. Lakshmi’s movements are unpredictable. Therefore, she is called Chanchalla. She moves in every direction.

Since Lakshmi is whimsical, she does not come through hard work, each time. Some people, like Karna, have to work hard to get Lakshmi. Others, like Duryodhana, get Lakshmi because they are lucky to be born in rich families.