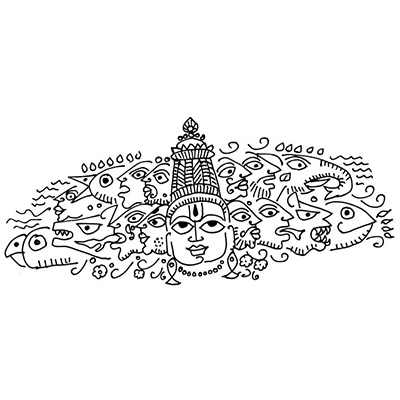 We don’t know if the idea of God existed in the cities of the Indus Valley over 5,000 years ago. The seals with their images and symbols do suggest an awareness of the idea of the sacred. Symbols found such as the bull, the elephant, the tiger and the tree continue to be used to indicate divinity in Hinduism today.

The Vedic hymns that reached final form 3,000 years ago, refer to many gods (deva) who inhabit the earth, the sky and the atmosphere in between. They also speak of one great god, a father (Prajapati), or mother (Aditi), or maybe an idea, such as language, or consciousness, that binds all gods and the entire world together. They also express doubt, ‘Who knows? Even the gods came later!’

In the Upanishads, that started being composed 2,500 years ago, there is increasingly talk of God within (atma) all living organisms and also God without (brahman), permeating everything around us, even the rocks and the elements. This becomes the jiva-atma and the param-atma of Vedanta tradition, and of the Bhagavad Gita.

In the Puranic tradition, that starts to bloom 2,200 years ago, stories communicate the idea of God. God now becomes a character in a story as Shiva who needs to get married and Vishnu who strives hard to create peaceful and prosperous societies. There is Ram, there is Krishna, and there are the many avatars of Vishnu. The tales challenge the monastic orders and inspire temples where the Gods are enshrined and worshipped and celebrated through song and dance and food. On the walls of these temples, gods and goddesses, with their grand entourage, go on adventures, and enjoy the pleasures of worldly life, while bearing the burden of responsibilities.

In the Tantras, which started being written down 1,400 years ago, though the tradition seem to be far more ancient, God is expressed using sexual metaphors, with the mind become the masculine Shiva and matter becoming the feminine Shakti. Here, the feminine form referred to sparsely in earlier traditions, but popular amongst village and tribal folk, takes Centre stage. It is she who makes God divine.

In the Bhakti songs that become increasingly popular in village streets and squares and documented in various regional languages, from about 800 years ago, an emotional highway is established to create intimacy with God who is visualised as master, friend, sibling, child, parent, lover, even enemy.

The British rulers of India tried to box the God of Hinduism. So questions are raised: is Hinduism polytheistic (many gods), monotheistic (one God), pantheistic, monistic, henotheistic or Kat henotheistic? Answers depended on what secured the approval of the colonial mind. Many chose monotheism, with a caveat: ‘one who is many’. Others went out of their way to show Hindus were not pagans or idolaters, embarrassed by how Christian missionaries described them. Some insisted Hinduism was agnostic, with atheistic traditions. This awkwardness informs much of our discourse on God today. We forget the long and complex history of God in India in our quest for a single homogenous definition of God for all Indians.