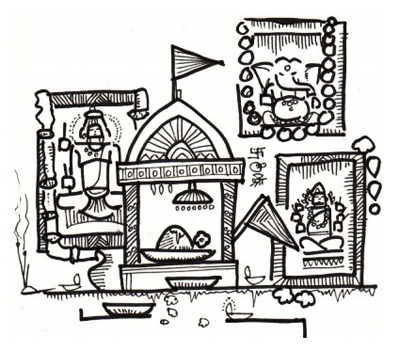 Published in First City on April 2012.

The word ‘puja’ probably comes from the word ‘pu’ meaning flowers in Tamil. The generally accepted hypothesis is that the cattle herding nomads who dominated North India around 1500 BCE (formerly BC), who called themselves the Aryas, preferred invoking divinity through the ritual of yagna where ghee was poured into fire, accompanied by the chanting of hymns, to invoke God. The settled agricultural communities of the Indian subcontinent, conventionally identified as Dravidians, preferred making offerings of flowers and fruit and incense to gods and goddesses. What was older, what was preferred, is not known. But by 500 CE (formerly AD), the yagna practices had died out, mainly because of Buddhist influence, and the puja became the cornerstone of Hindu ritual practices, elaborated greatly in temple texts known as Agamas.

It is said that after the Buddha died, his relics were buried in mounds. These became stupas. The common man worshipped Buddha just as they worshipped Yakshas and Gandharvas, water and plant spirits, with flowers, food, incense and lamps. They offered the stupa umbrella, cloth and waved chamars, to show their respect for him. Gradually, around the stupa halls or chaitya were built, around which were built viharas or residence of monks. Eventually these practices and structures gave rise to rituals and architecture associated with temples. So unlike yagna, which came from the elite, priests, the puja had its roots in earth-bound rituals of the masses.

The puja-ghar in the house, or the Mandir outside the house, may be a religious structure like a Catholic church, a Jewish synagogue or a Muslim mosque, but its purpose is very different. It is seen not as a prayer room or a meditation room or a gathering room for the faithful; it is seen as the residence of God. God can take residence temporarily in clay images, or permanently in stone images. This emerges from a careful analysis of the ritual called puja. In North India, the temple is often called durbar, the royal court. In the South, it is referred to as the deity’s house.

The puja is essentially a choreographed protocol of hospitality to welcome a guest and make him comfortable until it is time to depart. Similar rituals are seen during marriage, where the groom serves as the divine guest. The number of steps varies from six to sixty four, with the average being sixteen, being fewer at home, elaborate in temples, and most elaborate during festival time.

The first step is Avahana, invocation, which involves inviting the deity to arrive and reside in the image of metal or stone in the puja-ghar. During Durga-puja in Bengal or Ganesh-puja in Maharashtra, this is the literal arrival of the clay image into the shrine. This ritual sometimes involves painting the eyes, or uncovering the eyes, of the deity, thereby making the otherwise inanimate form of the deity into an animate form of God.

The guest is then offered a seat. The seat is usually designed like a throne for the guest and it has to be made special. An umbrella may be placed over the head to shade the guest from the sun and also to indicate his high status. Yak-tail fly-whisks or chamars are waved on either side to keep away the flies and to help the guest feel cool and comfortable.

The third step involves washing: the feet, the arms and the legs, maybe a complete bath, the Abhishekha, with milk and water, and oils. Water is given to rinse the mouth and drink. Thus the guest is refreshed fully, been cleansed of the dust that may have covered his body and hair after the long travel.

The guest is then given clothes and ornaments, usually made of silk or cotton. There are ornaments given to adorn the toes, the feet, the ankles, the fingers, the hands, the arms, the neck, the waist, the chest, the ears, the nose, the forehead and finally a crown for the head. The sacred thread is given either to be worn around the neck or across the chest. The body is anointed with sandal paste and other fragrant unguents. A garland of flower is placed around the neck, sometimes hanging just over the shoulder, its two ends free.

Incense is lit. Then the guest is presented food or naivedya, which may include fruits, butter, sugar, honey, cooked rice. The last to be offered in the betel leaf with the areca nut, which is to aid digestion. This is not offered to Shiva as he is a hermit.

Finally it is time for the arti, the waving of lamps. This is when the deity’s face is highlighted. And everyone bows to the deity. Bhajans are sung praising the appearance and deeds of the guest. Bells are rung, drums beaten, for the sound is said to ensure that the deity’s attention is aroused and ensured.

This is followed by offerings, almost like petitions being offered to a king along with gifts of flowers and fruits and incense. Devotion is expressed through offerings, particular to particular devotees. For example, Shiva is offered raw milk, bilva leaves, dhatura and bhang. Vishnu is offered butter, honey, jaggery and tulsi leaves. The Goddess is offered neem, lemon and tamarind. A portion is given to the deity and the rest is given back to the devotee.

Offerings given to the deity must not be mixed up. What I give, I must receive. What I receive contains grace that is meant for me. What another person receives contains grace meant for him. That is why, when people visit temples, and make offerings, they ensure they pay from their own pocket. If someone else pays, he is promptly repaid. The idea is to keep one’s debts to oneself and not make other people one’s debtors or creditors.

Often the priest who brings the aarti or the offering back to the devotee is paid a small fee, thereby the middleman is paid off and the transaction of offering in exchange for grace remains between deity and devotee.

In Puri, food cooked in temple kitchens passes through the sanctum sanctorum. By simply being in the presence of the deity, by simply being graced by the deity’s glance, the food transforms into bhog, the leftover food of God containing divine grace. This is made available in Anand Bazaar, the temple market, to devotees, who seek divine grace.

Besides looking at the deity (darshan) and making offerings (bhog, naivedya), devotees often go around the shrine of the deity and thus receive his grace. The practice of sitting in the temple is common. This is to reaffirm that one is not in a hurry but genuinely seeks a connection with the deity.

In Shiva temples, there are usually no doors and the deity is available all the time. In Vishnu temples, there are very clear rules of when the deity is accessible and when he is not. This is in keeping with the hermit nature of Shiva and the royal nature of Vishnu. Of course as grand temples were built and more priests appointed, the rituals became elaborate and even Shiva became inaccessible to the devotees.

The deity gets exhausted by the blessings it has to give and so temple doors are repeatedly shut, giving the deity time to rest and replenish his energy. When the deity wakes up, once again he is bathed, dressed, fed and adored, before it is time for him to be seen, receive offerings and grant grace.

The last ritual of puja involves bidding farewell to the deity known as udvasana . Either the deity is put to sleep, and the doors of the temple shut, or in case of clay images, dissolved in water, an act known as visarjan, or immersion, a reminder that nothing lasts forever. Everyone has to end. And all that ends comes back the next day, or next year, with a new invocation.