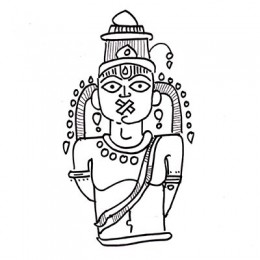 Recently a national library sent out an email in which my book, ‘Sita: An illustrated retelling of the Ramayana,’ was listed as FICTION. I was surprised and so I sent the following email to them.

My name is Devdutt Pattanaik.

It has come to my attention that my book ‘Sita: An illustrated retelling of the Ramayana’ (Penguin, India) is now part of your library. Thank you for that.

However, as per mailers received by members, it has been categorized and put in the ‘fiction’ section. That has surprised me.

– If you keep all books related to religion such as books on Bible, Jesus, Muhammad, Buddha, Gita, Jainism in the fiction section, your decision makes sense

– If, however, that is not the case, I request you to reconsider putting Ramayana in the fiction section. Mythology is best put in the non-fiction space as it relates to subjective truth of a people. This means believers think it is fact but non-believers do not.

– Mythological fiction like SL Bhyrappa’s Kannada novel, Parva, or MT Vasudevan Nair’s Mayalayam novel, Second Turn, can be put in the fiction section, of course. My book is not mythological fiction. It is a retelling of, and commentary on, the Ramayana.

They finally replied saying it was listed under religion.

Classification is power. What do we call fiction and what do we call non-fiction? The idea of God, for example, can be seen as figment of some people’s imagination and that would put all religious texts in the fiction section. Religions like Buddhism do not have the concept of God, but they do speak of rebirth. Even that can be seen as fiction in the world of the rational atheist. I wonder, what books are kept in the fiction section of libraries in Vatican, or Saudi Arabia, or Universities of Chicago and Harvard, and Oxford and Cambridge? Where are books on psychoanalysis, a pseudoscience as it is not based on measurement, kept? Where are books on paranormal events kept? Where do we keep hagiographies, books that glamorize and even deify political and religious leaders?

Objectivity is overrated. Every objective person plays power games positioning his objective and rational viewpoint over other people’s equally objective and rational views. Power games are never rational. They feed deep-seated anxieties and fears. We can break the most sacred shrine of a small jungle tribe and mock it as superstition, but try breaking a gigantic shrine of a major religious community on similar grounds — there will be catastrophe. At the wrong end of a gun, many imagined realities become history. It is true during riots. It is true in libraries.