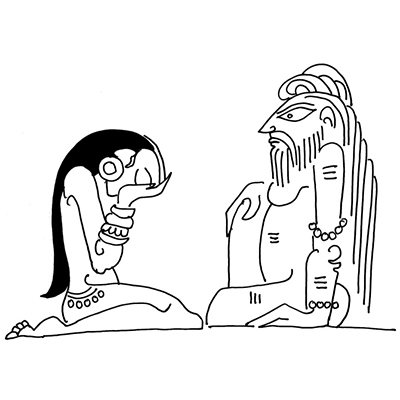 Some feminists expect me to ‘explain’ Hinduism’s misogyny. Typically, a verse from Manusmriti will be thrown at me. For example, verse 2.213: It is the nature of women to seduce men in this world; for that reason the wise are never unguarded in the company of females. Or verse 5.151: Girls are supposed to be in the custody of their father when they are children, women must be under the custody of their husband when married and under the custody of her son as widows. In no circumstances is she allowed to assert herself independently.

My response involves reminding them that this is not unique to Hinduism. Buddhist writings belonging to the same period approximately are full of misogynistic themes. In Vinaya Pitaka (the book of monastic discipline) 3.15-21, there is the tale of Sudinna – a young monk who breaks his vows of celibacy after his old parents beg him to give his wife, whom he had abandoned, a child so that his family lineage may continue. When this is revealed, the Buddha admonishes him thus: It is better for you to have put your manhood in the mouth of a venomous snake or a pit of burning charcoal than a woman.

I then draw their attention to a quote from the Quran that is used to explain the practice of wearing hijab amongst Muslim women. “And say to the believing women that they should lower their gaze and guard their modesty; that they should not display their beauty and ornaments except what must ordinarily appear thereof; that they should draw their veils over their bosoms and not display their beauty except to their husbands, their fathers, their husbands’ fathers, their sons, their husbands’ sons, their brothers, or their brothers’ sons or their sisters’ sons, or their women or the servants whom their right hands possess, or male servants free of physical needs, or small children who have no sense of the shame of sex, and that they should not strike their feet in order to draw attention to their hidden ornaments.” (Quran 24:31).

Not true. The ‘me too’ campaign reveals disrespect for women even amongst atheists and secularists and rationalists. Respect for women stems from empathy. Empathy is natural to humans, but needs to be cultivated by culture or by self-examination. It has nothing to do with religious doctrine or rational thought. Empathy comes from within without, not from without within.

This article is also listed under Buddhism, Indian Mythology