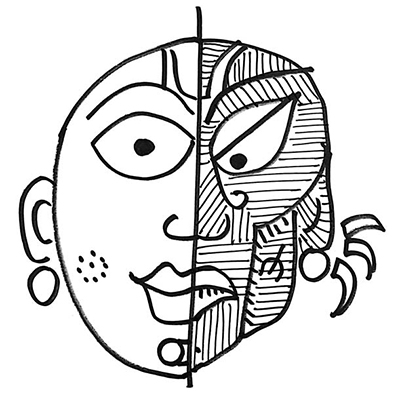 In Islam, there is no concept of Original Sin. God forgave Adam and Eve for breaking the rule and eating the forbidden fruit. God declared that no one inherits the sin of another: to each his own. Thus, humans cannot suffer for the errors of the first man and the first woman, who were beguiled by the Devil. This is one detail that distinguishes Islam from Christianity that places great value on guilt and repentance.

When was the last time you heard the story of the forgiving God of Islam? You most likely heard the story of a God who offers Jannat (paradise, in Arabic) full of virgins to those who participate in jihad. Which story do you think is more in the media, and the madarsas? Any guesses?

For an ambitious person, the idea of a forgiving God does not work. It does not grant middlemen, a.k.a. clerics, any power. One would rather have an angry God, one who is eager to punish for mistakes and crimes, and who goads people to do battle with the promise of heaven.

This idea of an outraged God, who wants you to go to Holy War, was used by the leaders of the Catholic Church to foment the Crusades a thousand years ago. It was very different from the loving, caring and forgiving God found in the parables of Jesus, who celebrates the return of the prodigal son. It rejuvenated the beleaguered Holy Roman Empire.

We find this now happening in Islam. Religious radicals are reframing the idea of God to present the divine as a vengeful oversensitive impatient being, one who goads his chosen people to purge the world of non-believers with promises of a good afterlife. Religion is overshadowing the idea of the nation-state. God’s laws, or convenient interpretations of these laws, are bypassing civil liberties. The images of religious warriors with guns, and vast crowds of the faithful mourning for the martyr are being glamorised for political goals in social media. The forgiving God is all but forgotten.

This social disease, and an increasing fondness for war, is leading young artists to reimagine Hindu gods. No more are they gently smiling images as on temple walls. Now Ram, Krishna, Shiva, Durga are all red-eyed, outraged, muscular, aggressive warriors and avenging superheroes. What does it tell us about our society? Faith now manifests not as patience, but as impatience, even intolerance.

Rational atheists are no better, turning victimhood into a fetish, constantly dividing the world into ‘oppressors’ and ‘oppressed’, ‘victims’ and ‘villains’, justifying their arguments with statistics, not realising that it is exactly what fundamentalists are doing. It is they who glamourised the word ‘angry’.

Today, Hindu radicals feel threatened by Muslims. Muslim radicals feel cornered by the world. Patriarchs are feeling threatened by feminists. Left Liberals blame the state for structural inequality. The state feels torn between judgemental journalists, greedy capitalists, and manipulative lynch mobs. Things are spiralling out of control. Time to pause, and ask: who made forgiveness a sign of weakness and punishment a sign of strength? Not God, for sure.