Give or Take: Bartering For Better Economics 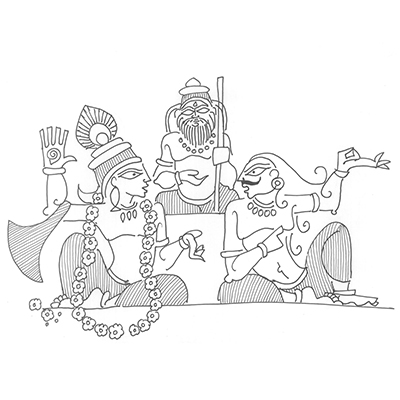 For peace, even Krishna asked the Pandavas to compromise — five villages instead of Indraprastha. But Duryodhana refused to give even a needlepoint of territory. Art by Devdutt Pattanaik

The word ‘transaction’ is associated with commerce, business and marketplaces. It is considered the opposite of spirituality, which should be non-transactional. Spirituality presupposes a spiritual entity, with infinite energy, that can give its energy to another without seeking anything in return, much like the sun, which gives sunlight to plants that convert it into food and energy. The plants do not give the sun anything in exchange. This is how the idea of God is visualized. This is how holy men are supposed to be. The sun provides energy to the fragile plants, who identify themselves as followers. This is a model associated with Bhakti.

But Bhakti in India is only 1000 years old. This was not how the Vedic system established itself. The Vedic philosophy is over 3000 years old and is based on the idea of transaction. In Vedas, there is no “all-powerful” being, instead this one being is fragmented into many beings, each of which can give something and which seeks something. So there is a need for transactions.

In the Vedic view, the absence of transaction leads to exploitation. At one extreme are those who only take and do not give. These are the Pisachas, the ghosts, who are hungry for life, and who trouble people because they’re constantly hungry for food. They do not give anything in exchange.

At the other extreme are the asuras like Virochan, Bali and Prahalad who are known for their generosity to a fault. They give so much that they can be taken advantage of. Thus, in the Puranas, we find the story of Bali Raja, who gives whatever he is asked. Therefore Vishnu appears in front of him in the form of a dwarf and asks him for three pieces of land. Then, Vishnu transforms into a giant and in two paces claims everything that the asura possesses. This is a reminder that resources are finite, but hunger or desire is infinite. Therefore, you cannot satisfy everybody’s hunger, you cannot solve everyone’s problems. Everyone has to figure out their solutions themselves. Puranas tell the story of Gayasur, the asura who was so good at helping everyone that he had to be pinned to the ground by Vishnu. Vishnu did this so Gayasur could not move around the world and take up other people’s responsibilities. Likewise there was Manikasur, who helped people constantly and so had to be taken into the sky and thrown down. His body is spread around the world in the form of jewels and metals. These gems and metal influence astrological forces, and help us to satisfy our desires, but cannot be easily found.

The Vedic module was anti-feudalism. In feudal systems, God is “all-powerful” like the king, the landlord who was the master and everyone owed their fortune to this “all-powerful” sun. Vedic world was based on yagya where there is a give-and-take between different entities. The yajaman invites the devata and offers bhog, an exchange. The devata gives him prasad satisfying his desire. This was all voluntary, it was not a contract. There were no obligations, and they were not obliged to fulfil anything. This is why Krishna asks all to focus on actions and not the results, as there are no guarantees in a yagya. In yagna, devata is not “all powerful”. The devata wants bhog; he desires something form yajaman.

Basically, we find the economic model in the world functioning in two ways. There is the feudal model where there’s one person, the despot, who has all the resources and gives it to you as per your needs. Then there is transactional knowledge where there is a voluntary, but fair, give and take. Here, the wisest man is a person who keeps giving without expecting anything in return. But the person receiving it carries the burden of repaying his debt. There is no god who gives you everything. You have to approach many gods to get everything you want like in a marketplace.

As India became more feudal, and old independent and interdependent tribes collapsed, old Vedic transactional thoughts were replaced by Bhakti ideas of serving the master and seeking his grace. Both the Left and Right wing seek the Bhakti model. In the Left-wing model, the state is the “all-powerful, all-giving, all benevolent” Bhagavan, providing support to all, dispassionately. In the Rightwing model, this role is done by business families who are beholden to politicians. Both seek control of Lakshmi, at the cost of others, allowing for corruption and exploitation, while in Vedic model, Lakshmi belongs to no one. She is given and received, constantly moving around creating value through transaction amongst people as well as gods who are all hungry.