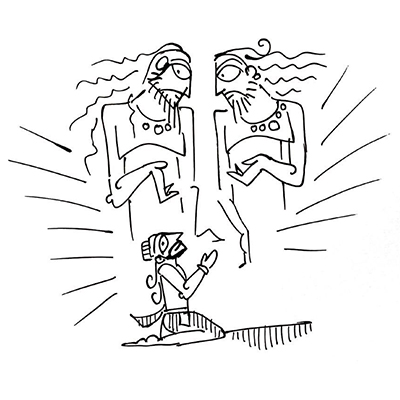 In north India, as per politicians, three major pilgrimage sites are important. The first is Ayodhya, where Ram was born and the kingdom of Ram was established. The second is Mathura where Krishna was born. The third is Kashi, with which Shiva is associated. Ram, Krishna and Shiva form the foundations of modern Hindu practices. With this, one gets the feeling that Hindu gods privilege the Gangetic plain.

The early Hindu scriptures were restricted to North India. There is reference to Punjab and Haryana in the Rigveda. The Upanishads refer to the wider Gangetic plain. The Mahabharata refers to Bengal and Odisha. Ramayana speaks of a more southern movement. By the Puranic period, we get more familiar with river systems, like the Narmada and Godavari, indicating a southward movement. Tamil scriptures, of course, talk of Kaveri. The Himalayan region gets increasingly connected with Shiva and many forms of Shakti whose shrines are found atop mountains and in caves.

In a recent lecture, a guruji kept insisting that they have been able to date the Ramayana and Mahabharata, using astronomical data found in the scriptures. He was asked by a student whether this happened before the exodus of Moses or after? This irritated the guru. He retorted that he was not concerned about what happened in other countries. The student then countered this reasoning by saying that he thought god belonged to all countries, not just to India. The guruji had no answer to it, especially since he prided himself on getting white men from Europe and America to take part in Hindu rituals.

This indicates how god is provincialised in religions. Even religions that claim to be universal such as Christianity and Islam are anchored in a holy land located in the Middle East, which seems odd to people, say, in the Artic circles who wonder why prophets are always in the land of sand, not snow.

As Buddhism spread to China, a new idea emerged. That there are many Buddhas with many Buddha heavens located in infinite worlds. This allowed Buddha to be located anywhere, not just India. So Buddhas were seen manifesting in Tibet, Japan, China and even Korea. Mormons did the same thing for America, by stating that hundreds of years ago prophets escaped from Babylon and took God’s word to America and this was rediscovered in the 19th Century by Joseph Smith. While some religions stay anchored to geography, some choose to break the fetter, and others invent new stories to link geography to God.