Gazing upon the mythic woman 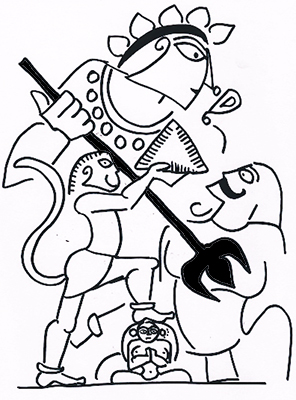 Lakshmi sits at the feet of Vishnu. “Patriarchy!” someone shouts.

·      Shiva as Ardhanareshwar, half a woman. “Gender equality,” someone asserts.

These images are at least a thousand years old. They are as popular today as they were then. So what do they say about Indian society? Patriarchal? Matriarchal? Gender-sensitive? All of the above? None of the above?

All of the above confuses us, as Indian society is undoubtedly patriarchal, but not as uniformly and universally as media would like us to believe and the West is eager to publicize.

My answer would be: none of the above.

But my voice will not be heard.

For I follow the Indian way of seeing which celebrates the symbolic, the subjective and the subtle not the modern (read Western) way of seeing which is rooted in the literal, the objective and the mathematical. The Indian lens allows us to find infinite meanings in the scriptures. The Western lens permits only one, preferably one that is simple, easy to understand, hence popular.

Every time I try to explain the Indian methodology, I notice restlessness in the audience. They get impatient. They want a quick and simple answer. A prescription. A directive. A clear reference. An objective interpretation based on ‘facts’. It is this yearning that has turned Manu Smriti and Ramayan into prescriptive texts — something they never were intended to be. In fact, to use Manu Smriti and Ramayan in the same breath would only bring despair to one familiar with the Indian gaze.

But there is another way of looking at these texts  and imagery. Attempts to present this way of seeing is condemned as challenging the dominant hegemonic Western template and is dismissed as an exercise in apology and defence.

So you feel gagged. You keep quiet.

The more you study Indian scriptures, the more you realize that things are not what they seem:  a rock is not a rock, a tree is not a tree, Ram is not a man, Sita is a not a woman, Hanuman is not a monkey, violence is not violence, lovemaking is not lovemaking. It is whatever the beholder makes it out to be (very post modern). But the point is for the beholder to become wiser, witness himself watching and interpreting, become aware of every bias, outgrow the need for prejudices, while empathizing with others who do so, not attempting to correct them. The more the observer expands his mind and widens his gaze, the less he will cling to the literal and the prejudicial. He will see the spirit of the form, the formless idea beyond the shape and the name. Then the representation does not matter, for reality reveals itself. This is called darshan.

So the same Ramayan can come across as a patriarchal document, matriarchal document, gender-neutral document, spiritual document, uplifting or degrading appointment, depending on the nature of the observer’s gaze. Like the idol of the deity in a Hindu temple, meaning comes from the devotee. As many devotees, as many evenings. There is not just the one.

The point of upanishad or intimate conversation is to develop darshan. It is not a conversation between master (who knows) and student (who does not know). It is a dialogue that allows both parties to see more by appreciating the other’s point of view. It is not about argument or consensus but clarification.

For me Lakshmi sitting at Vishnu’s feet, Kali on top of Shiva and Shiva as half a woman represent three different aspects of the same thing. And my interpretation has changed every time I look at them. And it keeps widening, each wider gaze making room for the earlier narrower gaze. It reveals at one level relationship of man and woman, at another level the relationship of mind and matter, and at another level culture and nature. It is about power not just between men and women but also between men and between women and between humans and animals.