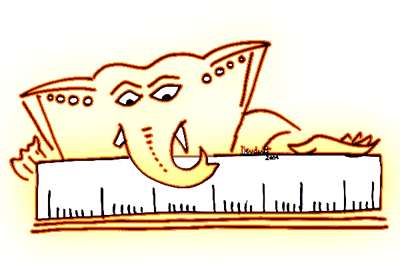 One day, a sage called Narad came to Mount Kailas, a mango in his hand. Kartikeya’s eyes widened when he saw the mango; Ganesha’s mouth watered. “Who is it for?” they asked in unison. “It is for Shiva’s better son,” replied Narad, a mischievous glint in his eye.  Parvati realized what Narad was up to:the cunning sage had taken upon himself the impossible task of making parents choose a favorite child.

Shiva was impressed by Narad’s words. “I am pleased with you, Narad. You go ahead and decide a measuring scale that will measure a better son for me,” said Shiva to Narad, “That son can have the mango.”

“The better son is the son who goes around the world three times,” declared Narad. No sooner did he say this than Kartikeya leapt onto his peacock and set out to be the better son. Up into the sky he rose and through the clouds he flew, determined to go around the world faster than Ganesha.

Ganesha, however, stayed where he was, on Mount Kailas, playing with his mouse, much to the surprise of Narad. “Why don’t you go around the world?” he said to the elephant-headed lad. “Let him do what he wants,” said Parvati indulgently. “But he will lose,” said a concerned Narad. “So what?” said Shiva, “Its only a mango.” Then Shiva smiled, “Look Narad, yet another measuring scale, one that belittles that wonderful mango you have given so much value to.”

Kartikeya went around the world once. He did so twice. He glanced behind for a moment, checking to see if Ganesha was catching up but Ganesha was no where in sight. Kartikeya wondered where his brother was, a little concerned about his brother’s wellbeing, and a little anxious about his own victory. As Kartikeya began his third circle around the world, he felt a little uneasy about Ganesha’s behavior. What was he up to? He knew his brother was no simpleton!

Sure enough, just as Kartikeya’s peacock was about to land on Mount Kailas, Ganesha got up and quickly ran around his parents. Once. Twice. Thrice! “There,” he said, “I won.”

“What do you mean, you won,” said Kartikeya angrily, alighting down.

“Is there a difference?” asked Parvati. “Yes, there is,” said Shiva. “Observe how ‘the’ world is objective. It contains the plants, the animals, the sky, the mountains, the clouds, the rivers, the stars, the ants and the people around us. But ‘my’ world is subjective. It contains our thoughts and feelings, our dreams and our memories, that is known only to us. What do you think matters more — what everyone sees or what we alone feel?”

Nobody said anything. But somehow everybody knew the answer. And it was clear who the winner was. Kartikeya smiled, went up to Narad, took the mango from his hand and gave it to his brother, after giving him a tight hug.

Ganesha cut the mango in two and offered one half to his brother. The two brothers then cut their respective shares and shared it with their parents. The seed inside the mango was given to Narad who said, “In my world, with my measuring scale, the seed is the best part of the mango.” Mount Kailas was filled with sound of everyone’s laughter.