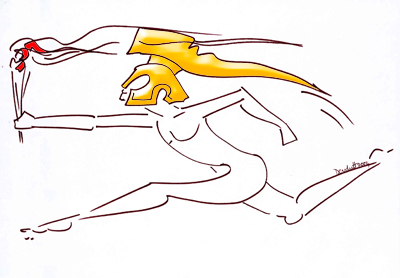 It started as a tribute to dead warriors. Homer’s Iliad mentions that Achilles held funeral games on the shores of Troy in honor of his male lover, Patrolocus. Marcus and Decimus Brutus held the first gladiatorial games in Rome in 264 B.C. in honor of their father. There are a number of possible explanations for the practice of funeral games. First, it honoured the dead warrior by re-enacting his military skills. Second, it served as a symbolic affirmation of life to compensate for the loss of a warrior. Third, it was an expression of the aggressive impulses that accompany rage over the death. Perhaps they are all true at the same time.

Games were also held to celebrate the killing of a foe. The Pythian Games celebrated Apollo’s slaying of the Python. The Nemean games celebrated Hercules’ killing of the Nemean lion. The ritual nature of the ancient Greek games and their association with death, war and victory suggests that these were organized ceremonies held to enable a people to come to grips with the eternally present fact of death. Antiquity was, after all, a time of high infant mortality, death by diseases we are now in control, and almost incessant warfare. Through ritual sport, death was brought under human control.

Sometimes the outcome of these shows was purposeful submission to death (as in the gladiatorial games); at other times, it was victory. The origin of the Olympic games, according to Greek mythology, is also enmeshed with death, war and victory. The most common story was carved on the walls of the famous Temple of Zeus at Athens.

It associates the games with Pelops, a Greek hero who lent his name to the Greek island of Peloponesse. Pelops was a prince from Lydia in Asia Minor who sought the hand of Hippodamia, the daughter of King Oinomaos of Pisa. Oinomaos challenged his daughter’s suitors to a chariot race under the guarantee that any young man who won the chariot race could have Hippodamia as a wife. Any young man who lost the race would be beheaded, and the heads would be used as decoration for the palace of Oinomaos. With the help of his charioteer Myrtilos, Pelops devised a plan to beat Oinomaos in the chariot race.

Pelops and Myrtilos secretly replaced the bronze linchpins of the King’s chariot with linchpins made of wax. When Oinomaos was about to pass Pelops in the chariot race, the wax melted and Oinomaos was thrown to his death. Pelops married Hippodamia and instituted the Olympic games to celebrate his victory and/or honour the memory of his dead father-in-law, Oinomaos, and all Hippodamia’s suitors who had died early. By being fair in the game, the athletes honored Zeus, king of Greek gods, and the keeper of the balance of universal justice.

Another story comes from the Tenth Olympian Ode of the poet Pindar. He tells the story of how Herakles, the great grandson of Pelops, on the fifth of his legendary twelve labors, had to clean the stables of King Augeas of Elis, which were reputed to be the dirtiest stables in the world. The city of Elis had long association with sports. One of its early kings, Aethlios, an ancestor of Augeas, organized athletic games in the region, thus lending his name to the words’ ‘athletic’ and ‘athlete’. Herakles approached Augeas and promised to clean the stables for the price of one-tenth of the king’s cattle. Augeas agreed, and Herakles rerouted the Kladeos and Alpheos rivers to flow through the stables, thus sweeping the stables clean. Augeas did not fulfil his promise, however. An enraged Herakles after finishing his labors returned to Elis and waged war on Augeas. Herakles sacked the city of Elis and instituted the Olympic Games at Olympia in honor of his father, Zeus, supreme arbiter of justice.

Some say, Herakles merely regulated the games Pelops had instituted. During the games Herakles taught men how to wrestle and measured out the stade, or the length of the footrace, from which comes the term ‘stadium’. Herakles honored the victors of the games with wreaths made of branches of the wild olive tree, which he had brought from the magical land of the Hyperboreans. The name ‘Olympic’ was a reminder to all mortals that the first games where death/war/victory were honored were organized on Mount Olympus, home of the Greek gods. It was held to mark the death of Cronos and the victory of Zeus over that king of the Titans.

During this game Apollo, the sun-god, beat Hermes, the messenger-god, in the footrace, and Ares, the war-god, in boxing. As a result Apollo, the embodiment of Greek male beauty, became the patron of all sports and the Olympic games in particular. Ancient written sources record the year 776 B.C. as the year when the Games began, or at least the year when records of Olympic victors began to be kept.

The first recorded Olympic games had one event, a race, called the stade (which is also a measure of the distance of the length of the track). By 724 B.C. a two-length race was added and by 700 B.C. there were long distance races (although the marathon came later). By 720 B.C., men participated naked, except in the foot race in armor (bearing 50-60 pounds of helmet, greaves, and shield) that helped young men build speed and stamina in preparation for war.

The epithet of Achilles (which literally means swift footed), the hero of the Trojan war, and the belief that Ares, god or war, was fastest of the gods indicate that the ability to win a race was a much admired martial skill. The Olympic games were not proving grounds for real combat. Just because skills in the Olympics matched valued martial skills does not mean the Greeks assumed the best wrestler made the best fighter. The games were more symbolic, religious, and entertaining. The ancient Olympics were individual sports which allowed an individual Greek to win glory.

The Olympic games forged the national, racial and intellectual unity of the Greeks. The Games connected the deeply spiritual ethos of the Greeks with their past, combined to the maximum degree the cultivation of the body, mind and spirit with universal philosophical values and the emergence of the individual as well as the cities of Greece with the paramount ideal of freedom. The games were a time when a truce was declared between the warring cities. The truce was, in effect, an interim of civic and military neutrality in honor of Zeus, the supreme judge and arbiter and source of wisdom, a pan-Hellenic gathering and renewal of cultural and blood ties among the Hellenic peoples from all parts of the civilized world, a peaceful interim.

Substitute the word ‘pan-Hellenic’ with ‘global’ and ‘cities’ with ‘countries’ and we might as well be talking about the modern Olympics. It’s a curious aspect of sports that even when they are part of a celebration of global peace, like the modern Olympics, they are nationalistic, competitive, violent, and potentially deadly. One just has to look at the ‘war cry’ of football fans, the waving of national flags by cheering crowds, the street parties to celebrate India’s victory over Pakistan in a cricket match and it is clear that it is underlying the sport is the game of politics. Sports, in general, could be described as ritualized warfare where one power competes with another, where each hero (star athlete) strives to defeat a worthy opponent within a setting where death is unlikely. Ritualized sport is undoubtedly an outlet for or way to sublimate humanity’s aggression. But defeat in the stadium is any day a better alternative to death on the battlefield.