From Jesus Christ to Santa Claus 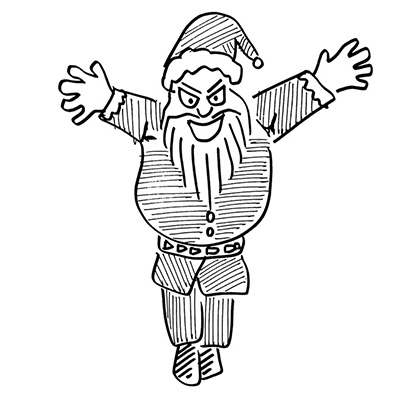 The story goes that an American visited a Japanese shopping mall and discovered to his horror that a Santa Claus effigy was on a cross! He thought this was a joke, or maybe a political protest, or a post-modern installation, but then he realised this was it was done innocently by store people who just assumed Jesus Christ and Santa Claus were the same people. This is not surprising when you see American serials where parents debate on whether to tell their children if Santa is real, or not. In fact, over time, in many homes, Jesus Christ has been removed from the Christmas discourse. It is all about Santa. Who is Santa?

There are many theories. The most popular urban legend is that it was a creation of Coca Cola because Santa Claus wears the same colours as a Coke can. And Santa Claus has become popular to prop up consumerism and is in many ways, what secular capitalism can do to religious rituals. For now you have a father figure who gives you gifts if you are ‘nice’ and no gifts if you are ‘naughty’. So Santa Claus is a kind of God who rewards you with stuff if you do what your parents tell you to do. A perfect capitalist-consumerist bastardisation of the Old Testament Abrahamic God who sends flood and fire and brimstone on people who do not do as he says. In many ways, Diwali is going this way as increasingly people are separating the feasting and gifting from all religious trope.

In Germanic Europe, before Christianity arrived, the belief was that in the middle of winter the one-eyed wise and bearded old Odin rides out of his eight-legged horse with a band of hunters across the sky during the festival of Yule. This perhaps has now metamorphosed into the idea of Santa Claus travelling across the sky on his reindeer sleigh, moving down chimneys, to stock gifts for nice children near the Christmas tree, an old pagan symbol. We must remind ourselves that Christmas is the birth of Jesus, and he was born in the desert. There was neither snow nor coniferous trees around the manger that he was born in.

Then there is generous St Nicholas of the Byzantine Empire, and Father Christmas of 16th century England and Sinterklaas of the Netherlands, all generous and jolly old men, who helped the poor in the nights when Christ was remembered inside Churches by rich barons and bishops, while outside it was dark and bitterly cold and the serfs starved. While St Nicholas is more like a bishop, Father Christmas and Sinterklaas are jolly old men dressed in red and green coat, lined with fur.

A whole Santa cult has emerged, complete with theme parks and letter writings and stories of his elves and Hollywood movies about his wife and his son, and his gift making abilities. Somewhere it competes, even overshadows, the idea of Jesus Christ and his birth in the humble manger surrounded by farm animals, shepherds and visited by three wise men under the special star. Is it the result of old pagan traditions that refused to give way to Church puritanism? Or simply the rise of commerce that invariably jostles for space during festival time? Or is it a deliberate attempt of a festival to distance itself from religion and make the festival less about praying and more about shopping? Things we need to think about as we unwrap those gifts our secret Santas gave us in our offices and schools.