From intellectual Gita to sensory Gita 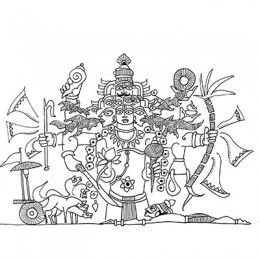 In the Uttara-khand (later section) of the Padma Purana, Shiva tells Parvati that Vishnu told Lakshmi that the first five chapters of the Gita are his five heads, the next 10 chapters are his 10 arms, the 16th chapter is his trunk and the last two chapters are his feet. Then for each of the 18 chapters of the Gita, a story is told, 18 stories in all. We are informed that by listening to the stories, we worship Vishnu and get the benefits of the Bhagavad Gita. We do not have actually read the Bhagavad Gita. Thus, Gita, the text, becomes a deity embodied in a set of stories.

The deification of Gita is further indicated by the composition of two songs: Gita Dhyana and the Gita Mahatmya, chanted before and after a Gita discourse. Gita Dhyanam, now a part of Vaishanva Tantrasara, was probably written in the 16th century by the logician Madhusudana Saraswati, who was strongly influenced by Chaitanya Mahaprabhu of Bengal.

Gita Mahatmya is found in the Varaha Purana dated between eighth and 10th centuries. In it, the earth wonders how will man trapped in worldly life, obliged to experience circumstances created by deeds of the past life, ever break free and find true happiness. Vishnu who is God replies, this can be achieved by reading the Gita. He equates the Gita to all places of pilgrimage, to all deities and states that reading the Gita will enable a human being to experience the world just as a lotus experiences a lake. The water of the lake does not stick to the lotus leaf and so the miseries of the world do not affect the one who reads the Gita. He promises to come to the rescue of those who read the Gita and states the benefits of Gita can be accrued even by simply intending to read the Gita, or chanting the word ‘Gita’, or contemplating on a verse. Those who do not read the Gita, he says, remain trapped in the material world, unable to see the world in way that brings joy.

Through such ideas the intellectual Gita is transformed into a sensory Gita. This transformation accounts for the popularity of Hinduism. People recognised that not all humans are intellectuals, and the intellectual approach is not necessarily the only way to approach the Gita. Non-cognitive ways are as valid to evoke the exact same feelings that Gita seeks to evoke cognitively.

Thus did the sages include diversity with empathy.