From Earth, To Earth 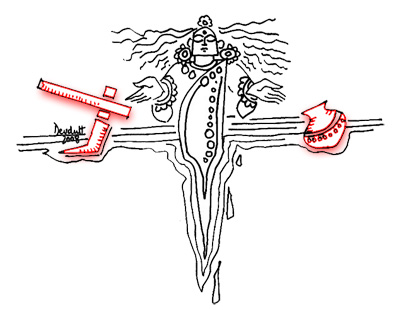 Sita is the heroine of India’s greatest epic, the Ramayan, and the dutiful and faithful wife of its hero, Ram. By rescuing her from the clutches of the demon-king, Ravan, Ram attains his status as hero and god, with him as the knight-in-shining-armor and her as the damsel-in-distress.But there is more to Sita than meets the eye and much of it is either subliminally expressed through the metaphors of the original Valmiki Ramayan or narrated in plot variants found in later regional and folk retellings.

Sita was no ordinary woman. She was plowed out of the earth by Janak, king of Videha. She was called Janaki meaning Janaka’s daughter, Vaidehi meaning Videha’s princess and Maithili meaning resident of Mithila, the city of Janak. But her most famous names, Sita, meaning furrow, clearly establishes her as the daughter of the earth. That she was not conceived in a womb, made her a-yoni-ja, hence a goddess in her own right.

Earth and agricultural metaphors are repeatedly used to represent women in the Ramayan. For example, the woman who is turned into stone for being unfaithful to her husband is called Ahalya, which means land which is unworthy of being ploughed (a=not; hala=plough). Wild and loose women, such as Tadaka and Surpanaka, who have to be killed or punished by Ram and Lakshman, are associated with wild untamed forests. This makes Sita (sita=furrow), who is neither fallow nor wild, who is neither rejected by man nor untamed by man, the perfect field, fit for plowing and sowing. She is the perfect wife, faithful and demure, who shares both her husband’s fortunes and his misfortunes.

Beneath the quiet and submissive exterior throbs a great vast underlying power. One is told, especially in folk versions of the Ramayan, that Janak had a bow given to him by Shiva, the great destroyer himself. It took a dozen men to lift this bow but Sita could pick it up with one hand as if it was a toy and wipe it clean. Janak was told by sages that only a man who could pick Shiva’s bow as easily should be allowed to be Sita’s husband. Ram, prince of Ayodhya, performed this feat and so he was allowed to marry Sita.

When palace politics forced Ram into fourteen years of exile in the forest, Sita followed him willingly. She endured all hardships silently. In the final year, she was abducted by Ravan, lord of Rakshasas, and held captive in his island-kingdom of Lanka. During this period, Ravan used many tricks from gifts to indimidation to magic to seduce Sita but she remained resolutely faithful to her husband, earning the respect of the Rakshasa folk. When Ram finally rescued her, she even went through a humiliating public trial by fire to prove her fidelity.

Some retellings of Ramayan portray Sita as a helpless victim but others show her playing a central role in causing Ravan’s downfall. In South India, for example, is the story that Sita was as much Lakshmi’s incarnation as Ram was Vishnu’s. A sage found her in a fruit, or in a lotus flower, and calling her Vedavati, or Padmavati, raised her as his own daughter. One day, she caught the eye of Ravan, who was traveling around the world, defeating sages, killing sages, raping women and generally spreading terror. He tried to molest her. To save herself, she leapt into the sacred fire altar and was burnt to death. Before dying, she swore that in her next life she would be the cause of Ravan’s downfall. Her heartbroken father scraped her ashes from the bottom of the altar and put it in a box which he then threw into a river. The river carried the box into the sea and the sea took the box to the shores of Lanka. The Rakshasas who found the box, assuming it to be a treasure chest, took it to their king, Ravan himself. Within the box was an infant girl. Ravan picked up the girl intent on adopting her only to be told by his oracles that the girl would be the cause of his death. Terrified, Ravan put the girl back in the box and ordered his Rakshasas to throw it back into the sea. The sea-god then gave the box with the girl inside to the earth-goddess who in turn handed her over to the childless Janaka. This story clearly establishes Sita as the karmic cause of Ravan’s death.

There are stories in Indonesia and Kerala and Gujarat that make Sita the daughter of Mandodari, Ravan’s wife. In his terror campaigns, Ravan would kill sages and collect their blood in a pot intent on using it as a sacrificial offering to gain occult powers. Some stories say he collected the blood from sages as taxes since they had nothing else to give. Ravan kept the pot of blood in his private chambers. One day, his wife, took a sip of it accidentally. The blood that entered her body made her pregnant. Now Mandodari knew that she was called Mandodari (mand= bad, udar=womb or abdomen), because her child would be her husband’s killer. Being a good wife, she did not want to hurt her husband but she did not want to harm her child either. So she gave birth to her daughter in secret and buried her in the fields outside Mithila where she was found by Janak.

There are many stories where Sita actually uses her power to protect or save Ram. For example, in the Punjabi Ramayan, when Ram is trapped by a serpent spell cast by Ravan’s son, Indrajit, Sita chants the Naga-mantra and liberates Ram.

In the Adbhut Ramayan, after Ram returns to Ayodhya, one of Ravan’s son, who has 1000 heads, launches an attack on Ayodhya. No weapon can harm this monster. Finding Ram helpless and anxious, Sita steps into the battlefield and confronts the demon revealing her secret identity – she transforms into Maha-Kali; she expands in size so that her head stretches above the clouds and her feet reach below the nether regions. She sprouts a hundred heads and a thousand arms each carrying many weapons. She has fangs for teeth and fiery eyes. She kills the thousand-headed son of Ravan, drinks his blood and kicks his heads as if they were balls. Ram terrified by Sita’s ferocious secret form, worships her as Adi Shakti and begs her to return to her more familiar form, that of a demure wife. Sita obliges. Thus is Sita acknowledged as the true power animating the cosmos, the source of Ram’s power, glory and divinity.

In the Uttar Ramayan, Ram abandons Sita because people refuse to accept, as queen, a woman who had a stained reputation because of her association with Ravan. The abandonment of Sita is the most tragic episode in the epic. It reeks of patriarchal  bigotry. Sita bears this calamity stoically and single-handedly raises her two sons in the forest. Such is her moral authority that her two sons, barely children, are able to capture Ram’s royal horse and defeat Ram’s army when they set out to conquer the world, showing the whole world that dharma, hence victory, sides with Sita not with the people of Ayodhya or their king. When Ram asks to prove her chastity once again, this time before his subjects, an exasperated Sita says, If I have been a faithful wife, let me return to from whence I came. The earth responds immediately and splits open and Sita is swallowed by the ground she stands on, disappearing forever, leaving Ram all alone and miserable. Thus does Sita reject a society that rejected her and it is this quiet assertiveness of the demure `field’ that makes Sita one of the most fascinating female characters in Indian mythology.