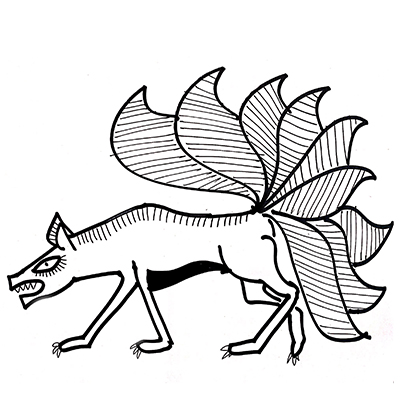 In ancient China, the belief was that as the common red fox grew older, it would get supernatural powers. Its colour would change and its tails would multiply. Therefore, with the passage of time, an older fox would turn white and grow up to nine tails. A white fox with nine tails would eventually become divine. But, in its journey from an ordinary, red, field fox to the divine, white, nine-tailed fox, it became a mysterious, shape-shifting creature, male or female, benevolent or malevolent. Such creatures came to be associated with many folklores full of mischief, seduction, trickery and even violence. The stories spread as far as Japan and Korea.

The oldest Chinese stories show the nine-tailed, white fox as a benevolent being, associated with the goddess of the West. However, in later stories of Chinese mythology, the fox spirit becomes a darker, malevolent force. The magical male fox would seduce young women with gifts that it would steal, thus destroying their morals. The magical female fox would drive emperors mad, force them to take foolish decisions, causing an uprising in their kingdom and their downfall.

In Japan, fox spirits remained generally benevolent. They were associated as the spirit gods of Inari, the goddess of rice and fortune. People encountered them in lonely spaces. There are stories of trickery—like when a musician was once stopped in the middle of the road by a family, who asked him to entertain them. They gave him food and wine. But in the morning, the man realised he was in the middle of a crematorium; all the food he had been given was actually garbage collected by foxes. There are stories of fox-women falling in love with and marrying men. They served them well until village dogs barked at them, forcing them to return to their true fox forms. They then ran away. But their husbands longed for their return, because they were such good wives.

Some of the stories speak of how the foxes have their souls trapped in a pearl. This pearl is either located in their mouth or in their tails. If you get hold of this pearl, the fox will promise you anything, if you return it to them.

There are stories of foxes turning into different animals, allowing a poor family to sell them to make money. As soon as they are sold, they return to their fox state. This enables the family to sell them, repeatedly, in different forms, helping them to become rich. Such families are known as fox-owner families. Families that suddenly became rich in villages in Japan, were feared as fox-owner families. This is because their wealth was supposed to have come from trickery.

Some foxes are shape-shifters; even turning into trees. There are stories of how hunters suddenly find trees in the middle of a forest, they had not encountered before. They realised these were fox spirits and would shoot arrows at the tree. The next day, they would find there a dead fox struck with arrows, instead of the tree.