Fourteen jewels from the sea 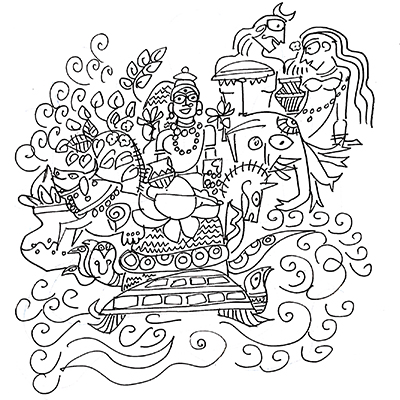 Published on 11th January, 2020, in the Economic Times

The churning of the ocean of milk is a key theme found in temples across ancient Southeast Asia indicating the spread of Hindu ideas there between the 3rd and 13th century. This story is linked to kingship and enterprise as it shows how Vishnu gets the eternally quarrelling devas and asuras to collaborate and churn out of the ocean all the treasures that make life worth living. Traditionally, we are told that fourteen magnificent jewels emerged from the sea. The list varies in the various puranas, but what is important is this: this tale was narrated in royal coronation ceremonies earlier and continues to be narrated during wedding ceremonies today, because coronations and weddings hold the promise of a churning of the ocean of milk, and produce all wonderful things that make life wonderful. These auspicious symbols also appear in the dreams of women who are about to bear great holy men, according to Jain traditions.

So, what are these fourteen things? There is no standard list, but whatever the list is, the fourteen treasures can be classified under 4 headings: dharma (responsibility), artha (success), kama (fun), and moksha (freedom). These are the four pillars that validate human existence say Hindu scriptures. The symbols of responsibility are the elephant, the horse and the bow. These are associated with kingship. The king rides the elephant to show his might. He is the Gajapati. The king also rides chariots and horses. He is then Ashwapati. He holds the bow in his hand which is a symbol of balance and poise as well as focus. Sometimes, an umbrella or a ‘chhatri’ is also said to have emerged from the ocean of milk as well as a footstool. This makes him Chhatrapati, who shelters all under his parasol. Dharma is about power given to kings, because they are supposed to have the poise, strength, gravitas and the capability to shelter everyone around us. Dharma is about power used to take care of others.

The symbols of Artha are symbols of wealth, prosperity and success. Plant wealth is represented by a tree, either called Parijat or Kalpataru. Animal wealth is represented by a cow, Kamdhenu. Mineral wealth is represented by a jewel called Chintamani and by goddess Laxmi, who rises in a lotus flower, bedecked with jewels, and represents splendour, fame and glory.
What about Kama? What does Kama or pleasure involve? It involves the beautiful woman embodied in the apsara, Rambha. The beautiful man embodied in the moon god, Soma. It is embodied in the god of alcohol, Varuni. Some say health or Dhanvantari is also associated with Kama deva, because how can there be fun, if there is no health? And in some lists, Nidradevi, or the goddess of sleep, is also recognised, because that is also pleasurable: to sleep without a care in the world.

That leaves Moksha. Moksha is represented by 2 things; one is Halahal, the poison, and Amruta, the nectar. Halahal reminds us of death, of the date when we will die. It motivates us to think about next generation, about delegation and talent management, and retirement and letting go. Amruta, which takes away the fear of death, is wisdom or ‘atmagyan’, knowledge of the immortal soul, that enables us to outgrow our own desire while satisfying other people’s desire. For when we are not afraid of death, of retirement, of being forgotten, we do not cling to our wealth and status, and learn to be generous. The fourteen symbols are a reminder what married couples must strive to create in their homes, kings must strive to create in their kingdom and entrepreneurs in their enterprise.